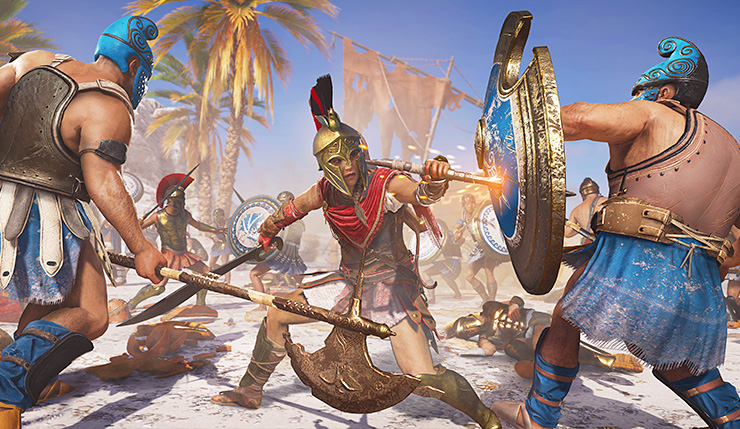 Assassin’s Creed Odyssey is this month’s Game Informer cover game, and they’ve managed to wring quite of bit of information out of the game’s developers. Earlier this week, they peppered Odyssey’s director Scott Phillips with 107 rapid-fire questions, and now they’ve revealed a few more-substantial tidbits about the game’s enemy scaling, new approach to healing, and more.

Healing, and other abilities previously tied to single-use items, are now mapped to face buttons and operate on a cooldown timer. Assassin’s Creed Odyssey creative director Jonathan Dumont explained the reason for the change.

“Healing, we wanted it to be a little more upgradable and the smoke bomb felt better on an ability. There are a lot of places where you can spend money on in our game, and rather than spending it on consumables or looting them it felt better to have it in your toolbox.”

A bit more has also been revealed about Assassin’s Creed Odyssey’s sprawling recreation of Ancient Greece. The game’s map, which is significantly larger than Origins’ Ancient Egypt, is almost entirely open right from the start. Enemies may “kick your ass” if you try to go somewhere too early, but you’re not prohibited from doing so. Speaking of bad guys, Odyssey will have enemy scaling, so early areas will never become too easy. The scaling only goes up though, so there will still be places you need to level up to handle.

Greece won’t just be big, it will be varied, with over 28 city states, each of which will have a unique look and feel. There will also be multiple factions you have to deal with, each of which will require a different approach. Odyssey director Scott Phillips described some of these factions…

“We’ve got the Spartans, which are sort of the more crazed, up-close dangerous fighters. They will go berserk and do more damage when they get low on health. We’ve got the Athenians, which are a bit more tactical. They will use archers and shields. Bandits will be ever present, attacking everyone, and they use quick get in, get out, move fast and get away tactics. And then we have what we initially called micro factions [like The Daughters of Artemis]. They’re really nuts to fight.”

If you’ve got the time, I suggest you check out Game Informer’s full article, as they also cover Odyssey’s story, dynamic weather, combat, and a lot more.