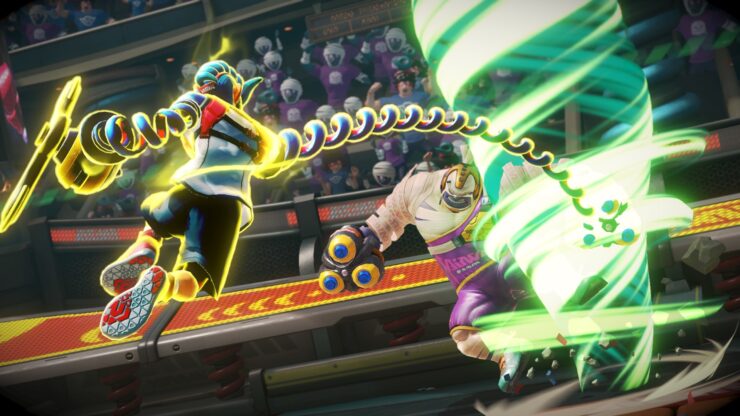 ARMS is finally out – Nintendo’s long-range boxing game was one of the first Switch exclusives confirmed, and the excitement has reached a fever pitch. ARMS just might be the most unique game on the Switch, and that’s reason enough to jump into the ring.

But the question is, do you have what it takes to become an ARMS champion? Follow these tips, and before you know it, you’ll be the champion of the ARMS Grand Prix.

Keep an eye on those ARMS

It sounds obvious, but you should always be keeping an eye on your opponent’s ARMS. When both ARMS at your foe’s side, he can guard, grab, attack – basically anything. Running at them head-on in this situation, or flicking your arms out in an offense, is a dangerous move.

Instead, watch your opponent’s ARMS closely – once they’ve thrown a punch, they can no longer defend, leaving them wide open to a quick one-two counter attack, or a grab.

Stage in ARMS aren’t like other fighting games – here, the stage will heavily impact how you do battle. In order to get the upper-hand early on, you’ll want to learn how to position yourself to make the most of the stages.

For one, pillars can be used as excellent cover, and certain ARMS can have their punches curve around pillars, accosting enemies hidden behind them. Stages have different levels of elevation too – keeping the high ground is a good idea, it’ll make it harder for enemies on lower ground to hit you, while you have plenty of aerial movement options to close in or avoid attacks.

Use mini-games for practice

Although they’re not the deepest experiences, the mini-games in ARMS can actually serve as fantastic practice for your more competitive matches.

Hoops will focus on your grabs, helping you learn the right situations to throw out both arms. V-Ball, the Volleyball substitute, will help you plan your punches while jumping and dashing around. Finally, Skillshot will help you practice those curved punches while you knock down scores of targets. Master these mini-games, and the combat will come naturally.

Learn to use your character

Characters here don’t have massive differences like characters in most fighting games – aside from the ARMS they start with, they control and play very similarly, aside from a few small changes.

For example, Ribbon Girl can double jump, allowing her much more aerial mobility. Min Min will kick out her legs during dodges, which will disable incoming ARMS that make contact. Twintelle can float in the air, and slow-down attacks. Master Mummy can absorb light hits while moving, and will slowly recover health while guarding – and so on. If you want to master the game, make sure to master your character first.

Perhaps the dirtiest words in all of gaming, motion controls have been scorned – and usually rightfully so – since the words “Wii Waggle” were first uttered. But in ARMS, you might just find them the best way to play.

While you can still curve your punches with the Pro Controller – or any of the other supported control methods – it just doesn’t work the same way. Your movement is tied to the curve of your punches – this makes it easier to stand still and fire a punch directly forward, but much more difficult to jump and dash around stage while curving punches in a variety of directions – this, however, is natural when using JoyCon motion controls thanks to the nuanced and accurate degrees to which you can tilt each punch. It’s not as responsive as traditional button controls, but motion controls add a level of accuracy – and most importantly, fun – to the game which you might not expect. 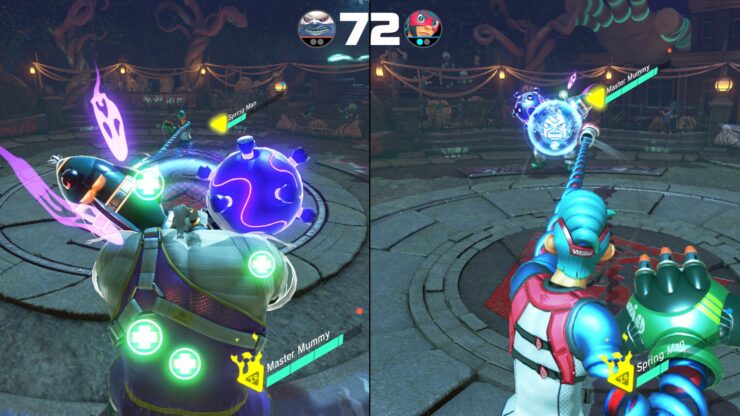 ARMS is a great fighter, especially for players interested in fighting games, without having the available time necessary to "get good." One of the best and most accessible fighters we've had the pleasure to play, the game is out now for Nintendo Switch. Follow our tips to hold your own against the best boxers out there!