4A Games, the Maltese developer (a subsidiary of Saber Interactive since August 2020) known for the Metro franchise, has established a reputation to deliver cutting edge visuals and technology with its titles.

A while ago, we reached out to the studio to arrange a tech-focused Q&A that would dive into next-generation console hardware and the different implementations of ray tracing from NVIDIA and AMD.

Now that the next-generation update for Metro Exodus is official, we are also finally at liberty to publish our own exclusive interview with Chief Technical Officer Oleksandr Shyshkovtsov. Enjoy! 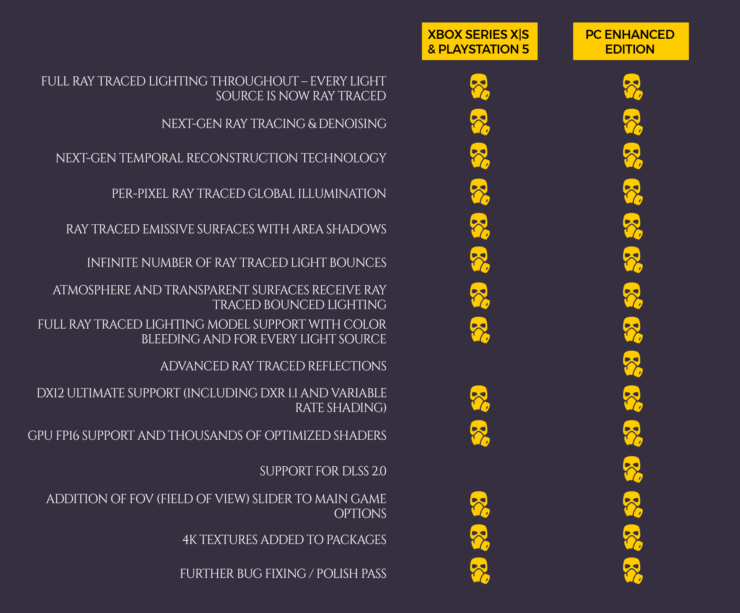 On PC, 4A Games fans have been wondering for a while if you could update the game's version of DLSS to the vastly improved 2.0 technology.

Yep, we are working on it and intend to ship a PC update alongside our Gen9 console support.

We have some issues with it currently because of the stochastic nature of our renderer. Final denoising happens at the end of the pipeline, inside our temporal reconstruction, which is analogous to DLSS in purpose but is algorithmic. DLSSv2 requires much “cleaner” input, but I am quite confident we’ll get this worked out.

In last year's interview with Digital Foundry, you said 4A Games is now 'fully into ray tracing, dropping old-school techniques completely' and that you've been experimenting with some spectacular results following the release of Metro Exodus.

On the first point, does that mean you're evaluating full ray tracing instead of a hybrid rasterization/ray tracing approach? On the second point, can you discuss some of the experiments that you've been attempting recently?

Rasterization is still useful (read: performant) where there are coherent rays, like primary G-buffer rendering. But we need more and more “random access” to a scene, mostly to improve the lighting, which is the only major difference left (technologically) between offline (films) and real-time rendering. We have a fully unified lighting pipeline now, both for forward and deferred materials. Everything does an infinite number of light bounces. In the end, the visual gap between offline path-tracing and real-time graphics shrinks a lot in our case.

With regards to ray tracing specifically, how would you characterize the different capabilities of PlayStation 5 from Xbox Series X and both consoles from the newly released RTX 3000 Series PC graphics cards? Overall, should we expect a lot of next-gen games using ray tracing in your opinion?

What I can say for sure now is PlayStation 5 and Xbox Series X currently run our code at about the same performance and resolution.
As for the NV 3000-series, they are not comparable, they are in different leagues in regards to RT performance. AMD’s hybrid raytracing approach is inherently different in capability, particularly for divergent rays. On the plus side, it is more flexible, and there are myriad (probably not discovered yet) approaches to tailor it to specific needs, which is always a good thing for consoles and ultimately console gamers. At 4A Games, we already do custom traversal, ray-caching, and use direct access to BLAS leaf triangles which would not be possible on PC.

As for future games: the short answer would be yes. And not only for graphics, by the way. Why not
path-trace sound for example? Or AI vision? Or some explosion propagation? We are already working on some of that.

There's been much talk within the game development community about the potential downside of having to support a lower min spec with the Xbox Series S, particularly for its limited RAM. Do you foresee having any issues because of this?

The RAM is not an issue for us (currently), but GPU performance presents challenges for future titles. Our current renderer is designed for high spatial and temporal resolution (read: 4K @ 60 fps). It is stochastic by nature. Dropping any of those would require us to do more expensive calculations dropping performance even further. We have a compromise solution right now, but I am not satisfied with it yet.

Similarly, when Sony announced that the PS5 would feature variable frequency for both CPU and GPU, that raised some eyebrows. How do you feel about this peculiar choice for a console?

I am completely OK with it. Any engine workload is variable by nature, be it rendering or gameplay simulation. It’s just another variable for which we already adapted to. By the way, we’ve lived with that for decades on PC.

When it comes to fast storage, both PlayStation 5 and Xbox Series X seem to have a design advantage compared to PC. Do you see that as a significant issue for PC games, resulting in longer load times for instance, until Direct Storage and RTX IO will be widely adopted?

We have a huge fanbase that spans nicely across both consoles and PCs, so we are quite
conservative about IO for now (read: old-school) at 4A Games. Even on my home PC I usually install games on HDD, as recent games are way too large for my SSD!

That would not be the case for exclusives when you could directly design the game around what is ultimately an unlimited memory, ‘cause streaming data in is about instant. That’s the future, definitely, we are just not there yet.

Out of the features available in DirectX 12 Ultimate, which one do you believe will be most useful in terms of performance? Do you plan to utilize them all in the next 4A Games project?

Currently, we use DXR 1.1 inline raytracing and VRS. I like sampler-feedback - I’ve asked hardware
vendors about this for years and it will be utilized for our future projects. Not sure if we’d go for
mesh shaders in the future as we are not that dependent on traditional vertex/primitive/raster
processing anymore on recent architectures. Our current frames are only about 10% raster and
90% compute on PlayStation 5 and Xbox Series X. And raster pairs well with async compute.