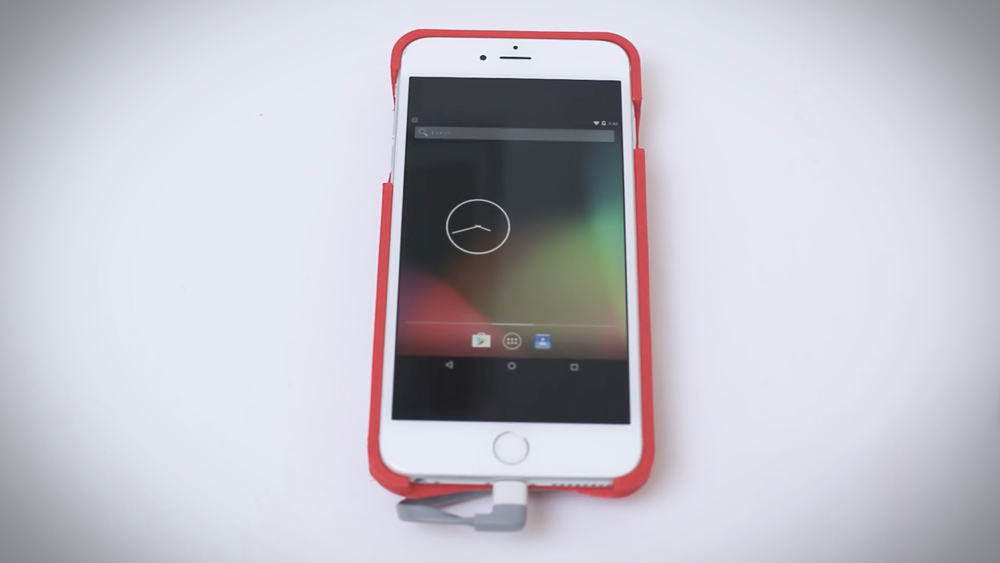 The unthinkable has been achieved - a 3D printed case brings Android OS to the iPhone 6 Plus. How does the entire contraption work? You'll be surprised to learn about it.

Android Running On iPhone Sounds Outrageous, But It Has Been Done Once Again

This is not the first time Android has been loaded up on an iPhone, as the feat was achieved back in 2010, after which it was never heard from again and development came to a halt thanks to Apple tightening things up on the iPhone at the hardware front. Fast forward six years and the unthinkable has been achieved once more, but things are quite different this time around. See, Android is not actually loaded onto the iPhone 6 Plus on a system level, instead, things are carried forward with the aid of a 3D printed case, which is the heart of the whole deal and makes the entire thing possible in the first place.

See the video yourself down below and then we'll explain in a concise manner what's actually going on.

The developer behind the contraption, Lee, should be given credit for what has been achieved, and the entire thing is possible thanks to hardware and software both. An app is first launched on the iPhone, after which the smartphone is slid into a 3D printed case. The case in turn connects to the iPhone 6 Plus via Lightning, after which Android instantly boots up.

To cut the long story short, the 3D printed case behind the iPhone connected via Lightning packs smartphone hardware itself, which makes use of the iPhone as an external display. Think of emulation and you're not far off what we're trying to say here.

Now, as you can see from the video, performance is not exactly groundbreaking, and Android is barely usable. And it's quite certain that this feat has been achieved as a proof of concept, nothing more, nothing less.

But, nonetheless, it's a very exciting project from Lee and we highly recommend that you go through his project on Medium, and see for yourself how the contraption came into being. It's not an easy task at all, and a lot of hard work went into it.

What do you think of the whole thing? Do you think Android on iPhone is the biggest sin of the century? Be sure to drop your thoughts regarding it in the comments section below. We'll be waiting for your opinions!