Gaming industry is growing faster than ever and with advancements in fields of technology, gaming has reached a whole new level. Gone are those days when you could easily count pixels while playing Mario or any other video game. Higher frame rates have flatten the in-game experience and while PC gamers enjoy games at their desired FPS, console gamers have to typically stick with either 30 or 60FPS. Below is a 30FPS vs 60FPS video comparison showing how games look while running at different frame rates. 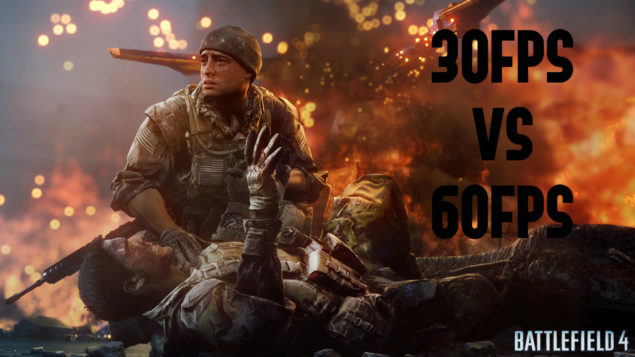 If you are one of the millions of proactive folks in the gaming world, you might have passed across a 30FPS vs 60FPS discussion where people go crazy over their claims concerning best frame rates for better story-telling. It has now actually become difficult to claim if 60FPS is better than 30FPS, of course 60FPS would be more smoother but some people think 30FPS cannot be beaten, even by the double of its value.

In this era of PlayStation 4 and Xbox One, a new video game title is not completely considered as next-gen unless it runs at 1080p/60FPS. However, most next-gen games run at 30FPS, probably because the in-game world looks much better at 30FPS. To some people, higher frames per second matter a lot, others just don't care as long as they are enjoying the gameplay.

Frames per second determine how fluid a game will run and while most people believe a human eye cannot tell the difference between 30FPS and 60FPS, it is important to set FPS according to the type or scenes displayed in the game. 30FPS is actually fine for slow paced games, which focus on one scene for long and then the view changes slowly. Fast paced games, especially multiplayer and online games, run better at higher FPS. Games with quick movements and changes in FOV require 60FPS for better gameplay and story-telling.

Today we have a 30FPS vs 60FPS video comparisons featuring gameplay clips of some famous games including Battlefield 4 and Sleeping Dogs running side-by-side at both 30 and 60 frames per second. These clips come from a newly created website that features nothing else but 30fps vs 60fps gameplay video comparisons, letting you to decide which one is better, or do they both deliver similar in-game experience. Below are some clips from Red Orchestra 2 and Battlefield 4 running at 30 and 60FPS

Simply click here to see all 30FPS vs 60FPS video comparisons. If you are on limited hardware power, close background programs to stream the clips smoothly. Reload the page by pressing F5 key if the clips go off sync. Clips displayed at left are running at 30FPS while the right ones are running at 60FPS.

Can you tell the difference between 30FPS and 60FPS? Let us know in the comments.

Destiny 2 Could Have Been 60FPS If It Had Dedicated Servers, According to Veteran Network Programmer