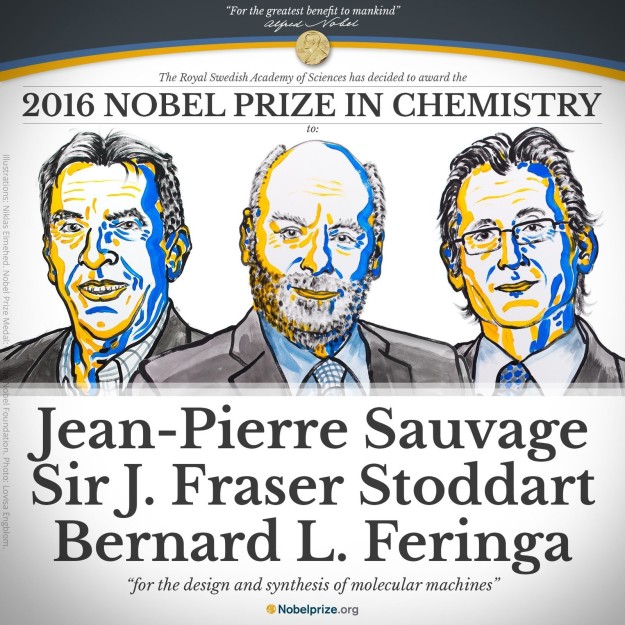 2016 brings another Nobel Prize in Chemistry and this year it is being split equally among three scientists. Jean-Pierre Sauvage, Sir J. Fraser Stoddart and Bernard L. Feringa were given this prize for designing and building the “world’s smallest machines”. Sauvage originally belongs from Paris but is currently working at the University of Strasbourg, France. Stoddart’s birth place is Scotland and is now at Northwestern University in the US. Feringa is working at the University of Groningen but is from Netherlands.

What did they do?

These scientists have worked hard for the development of molecular machines – molecules with controllable movements. In the 1980s Sauvage was responsible for linking two ring shaped molecules together in a manner so that they formed a chain. This chain is referred to as a “catenane”. The early 90s brought the efforts of Stoddart who was successful in creating a machine, “rotaxane” and was made of a molecular ring on a molecular axle. Later in the same decade, Feringa became successful in building the first ever molecular motor. Over the years these three scientists have worked hard and have improved their machines. In 2011, the Feringa group was successful in making a “nano-car”. 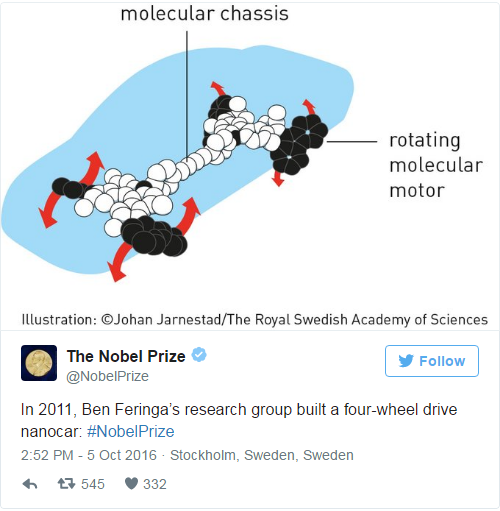 This prize was announced in Stockholm at a press conference. Olof Ramstrom, a member of the selection committee said, “What these three laureates have done is they have opened up this whole field of molecular machinery and shown it is possible to make machines or machine-like function at the molecular level, and really mastered control at this level.” He further added, “It’s a development stage similar to the beginning of the 19th century, when scientists demonstrated electrical machines, which then created a revolution and now we have electrical machines everywhere.”

Feringa spoke to the Press conference on the phone and said, “What I said when I got this message was, ‘I don’t know what to say, I am a bit shocked because it was such a great surprise’. My second remark was ‘I am so honoured and emotional about it’. When I saw these machines working for the first time was also a shock, because for the first time we saw movement, a motor. I could hardly believe that it worked.” Well it’s alright Sir most great inventions and discoveries are shocking and incidental. Looks like hard work and humbleness always pays off.
The scientists will collect the Nobel on the 10 of December in Stockholm this year at the anniversary of Alfred Nobel’s death.