On this Monday, Apple is co-hosting it's major event named 'Spring Forward' which has generated high hopes for all Apple fans out there. The media event on Monday will showcase some of the most tempting gadgets like the Apple Watch and much more. As times shrinks by, there is some pre-heat pileup sensed inside of Apple. There is a lot to expect from Apple and they know about it.

What we found out recently is that Apple has slipped the shipment time from ''in stock'' to ''1 business day''. This change in shipment times is implied on both, the MacBook Air and the 13-Inch MacBook Pro. The date is devised, as to overcome the cumbersome responsibility of the event. Recently, we reported that there will be a refreshed look of the 13-Inch MacBook Air which will be packed with Intel's new and latest Broadwell processors along with improvements in the graphics department with an Intel HD 6000. But we know what will take you guys aback - Apple might also upgrade the 13-Inch MacBook Pro. The update may include hardware changes similar to that of the revamped MacBook Air model.

The details and dates to shipment are slipped all over North America along with Online Apple Stores in Canada, United States and Mexico. All of the regions corresponds the same ''1 business day'' approximate. However, the United Kingdom and Australian Online Store have no sign of the changed shipment time and regular ''in stock'' remains. In some regions of the United States like California and New York the availability of MacBook Air and MacBook Pro remains unchanged and has 'in stock' availability. 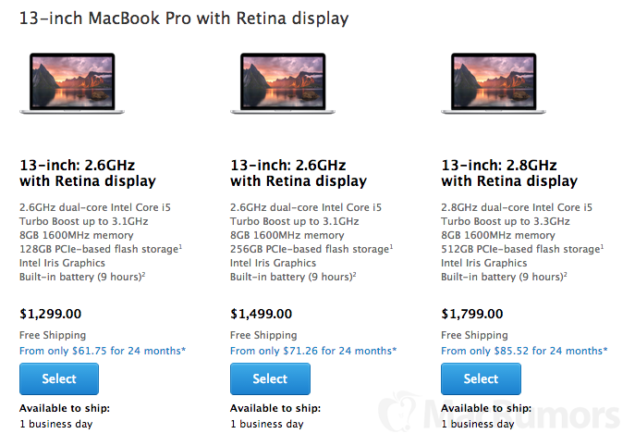 The faster more sophisticated Intel Broadwell processors are available for all variants of the two models, MacBook Air and MacBook Pro. However, more powerful chips are yet not available for the bigger MacBook Pro 15-Inch model and are expected to arrive later this year according to reports. Nonetheless, it is possible that Apple might leave the upgrade of its MacBooks for a later date and focus solely on Apple Watch but you never know how Apple may surprise us all. This is it for now folks, we'll let you know more on this as soon as reports arrive. When do you guys think will the MacBook upgrades arrive?