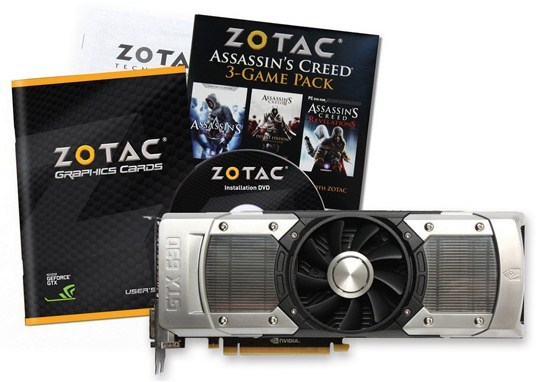 Among others, ZOTAC as well have launched their GeForce GTX 690 Graphics card. Maintaining the reference design like other launched GTX 690 graphics cards, it had been disallowed by Nvidia themselves for doing any of their own branding on top with these editions.

Too good to be true, Nvidia’s reference GTX 690 does look something out of the future and one doesn’t want to mess with the stock cooler itself due to its awe design by Nvidia themselves for the first time ever.

The ZOTAC GTX 690 will be on retail for $999 along with unlike others, a game bundle included namely the Assassin’s Creed 3-Game Pack that includes steam coupons for other games from the franchise themselves.