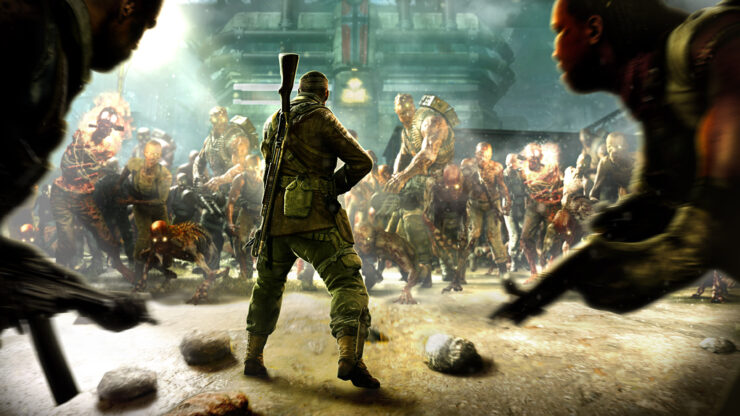 The game is due on February 4th for PC (as an Epic Games store exclusive, for the time being), PlayStation 4 and Xbox One, and we've got the chance to interview Rebellion's Lead Level Designer Jordan Woodward to learn more juicy details on the story and gameplay of Zombie Army 4. Enjoy the read!

I'm not sure if you were a part of developing Strange Brigade, but that game also had an emphasis on cooperative action, so I'm wondering if you had any lessons or takeaways that you took from that game into Zombie Army 4.

If you remember Strange Brigade, it had some traps and you could shoot them and it would activate like spinning blades, for instance, to kill the mummies. In Zombie Army 4 there's also traps as that's one feature that people really liked in Strange Brigade that we found it was a really easy and good fit for Zombie Army 4, too. As you play there are traps located around the environment that you can shoot, like there's a plane propeller. The resistance fighters surviving in the world have built basically a plane propeller attached to an engine, and you can shoot it and it will spin the blade. Pour zombies into that and chop them up into tiny little pieces. It's really cool. I mean, that's one feature that worked really well in Strange Brigade and we saw it really like a natural fit for this new game.

Makes sense. What would you say is the biggest new feature in this fourth installment?

Mainly, I think it's the progression and customization. Also, the size of levels and the way the levels are played (and the layouts of the levels). The customization is much deeper than in previous Zombie Army games.

Is this just cosmetic customization or gameplay related as well, such as changing and tweaking classes?

Both. We don't have classes in Zombie Army 4, but we allow people to add perks to the characters. So as you level up, you unlock perks and you can attach those to your character and change them at any time. So for example, there's a perk you can add to your character called Second Chance, and what Second Chance does is when you get knocked down by zombies, if you kill a zombie you automatically get back up, you revive basically. That's one perk and there are other perks such as reducing damage, melee damage, or increasing your accuracy. That sort of thing. So you can change those anytime as well, you're not locked to the perks you choose.

We also have weapon upgrades. As you explore the environments, you find and unlock weapon upgrades. And you can use a workbench in the environment or use a character loadout screen to apply weapon upgrades to your weapons and there are things such as doing more damage, increasing range, reload speed or changing the type of damage the weapon does such as electricity or fire. Those upgrades as well can be changed at any time based on what you prefer, but there's also cosmetic customization which doesn't affect gameplay. We have hats, emotes, taunts, character skins and weapon skins. And they're purely cosmetic. There are also little charms you can add to your weapons as well such as a little rifle bullet that hangs off it. These are all purely visual. As you level up you unlock more of those and it's almost a bit like bragging to your friends for your high level and it's just generally to give you some nice customization for your characters.

Do you have a level cap to progression in Zombie Army 4?

Yeah, I think there is, though I can't remember off the top of my head what that is!

Fair enough. Do the characters have defined roles?

They do have defined roles, but it's very loose. They have traits, but they don't massively affect the gameplay. So for example, Boris, he's like the stronger character. I think he can take more damage than other characters, for example, but it's very slight, it's not really game breaking. It's just really slight, sort of a push in a direction. But it doesn't matter so much because you can, like I said, put perks into whatever you want, weapon upgrades into whatever you want. And you can choose how you specialize your character and the direction you're going in. And I think basically what we wanted to do was encourage friends and co-op players to talk amongst themselves and discuss what perks and upgrades and play styles complement each other and just work well together and then, between you, see what works best for you as a group. We tried to give people as much choice as possible, and there's no wrong answer. There's no right and wrong way to play the game. It's all depending on their choice.

Are you planning to add more characters after the game's launch? Can you talk a bit about post-launch support?

And, you know, in terms of the campaign, do you have an idea how much time it takes on average to complete the story of the game?

Do you have any randomization factors for co-op multiplayer, to enhance the replayability of Zombie Army 4?

Yeah, I think the game is very replayable. So, there's some randomization in the enemies and the spawning. And depending on the difficulty level you choose, it will be kind of different every time. So you can always push yourself to have extra challenge. You can also fully customize the difficulty. It's a one to four player game. But you can play it in solo, as if you were playing in four player. So you basically put it on the four player setting in solo, and it will spawn zombies the four player game would be expecting, so you can kind of tweak your difficulty to be really customized to however you like it. And then choose Easy, Medium or Hard on top of that. So it's really customizable, the game will change quite a lot, quite drastically, based on how you tweak the difficulty. Also, I think it is quite replayable in terms of the upgrades and perks you're using, and just the combination of what you and your friends are using. So depending on which group of friends you're playing with and what their weapon preferences are or what their perks and upgrades are, the game can be very different, there's a lot of replayability there.

Speaking of replayability, many online multiplayer games are slowly adding cross-play or at least cross-save. Is that something you're discussing in the studio for your titles?

It is indeed something we are discussing, but not something we've announced for Zombie Army 4.

Alright. I think the game also features a Horde mode, right? Can you talk about that a bit?

So, the Horde mode is more like a survival mode. The main premise of Horde mode is to defend an area against the Horde. In one example, you'll be defending a small area, and there'll be zombies spawning all around you from specific spots and you complete waves of enemies. And then, as the waves progress, the enemies get harder, more and more enemies spawn, more spawning locations open and different enemy types spawn. Every horde mode enemy combination is different so the waves from one level to another aren't necessarily the same. Basically the idea is to survive as long as you can against a horde of enemies and progress as far as you can through the waves.

Is there going to be a leaderboard?

I don't think there's a leaderboard, but there is scoring, so you can try and improve your score every time, keep replaying it to try and get a better score.

I have to ask about the zombie tanks and sharks. How did those two come up?

It seemed a really obvious fit for us to put zombie vehicles into the game. It's a World War Two game. And, you know, we already had tanks and the like in Sniper Elite, as vehicles were a massive part of World War Two, so the vehicles just seemed like a really natural fit for the game. They're an additional feature that we didn't have, and quite a terrifying and hardcore enemy, almost like a mini-boss I suppose. There's a little bit of a story behind the vehicles and how those came to life because they're living vehicles, so there's a bit of deep story lore there to explore when you're playing the full game. As for zombie sharks, we had quite a few levels with water such as Venice, Italy has quite a lot of water. So it just came up as a cool idea, I think we were playing through Venice and someone basically came up with an idea of what if there were, you know, zombie sharks in the water and it kind of snowballed from there.

Alright! I've noticed Zombie Army 4 seems to have kind of an opening when it comes to the release window as there are no other big games nearby. How do you feel about that?

I mean, that's probably not a question for me. But I'm pretty happy with the release date. Because we're getting to a point now where we've got a really, really polished game. And through all the playtesting we've done and the shows we've taken it to, we've had a really good reception. People can't wait to play it. So it's getting close for us now and I'm really looking forward to seeing it in people's hands, we're in the final polishing stages to try and make sure it's the best game we can make.