MSPoweruser has spotted the functionality live in YouTube Music under the existing Library tab that organizes your collection by Downloads, Playlists, Albums, Liked songs, and Artists. The Artists page has added two new tabs: YT Music and “Device Files.” The former lists bands and musicians that you’ve subscribed to in YouTube, while the latter displays audio files stored on your phone’s internal storage or SD card. 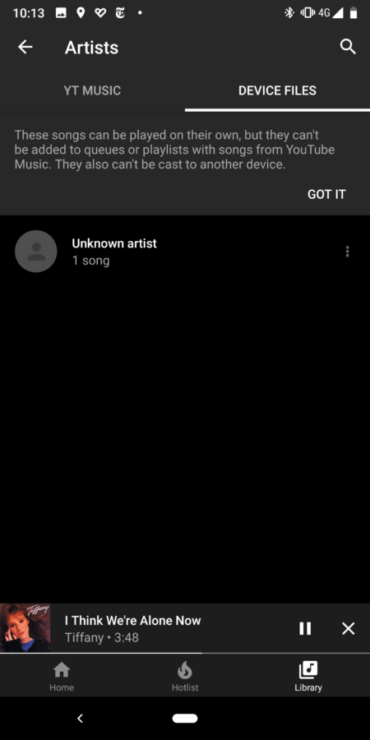 It is worth noting that the local files can be played by themselves, but cannot be added to existing YouTube Music playlists. Similarly, there is no way you can cast the content over to your Chromecast/Google Home either. It is understandable that the feature doesn't exist, given that Google sends a 'streaming link' to cast-ready devices, and there's no way of generating one when there's a local file involved.

The ability to play local audio files was added earlier this year to the app. Today's update adds a browser right within the app instead of opening a player when clicking on music files elsewhere in Android. YouTube Music’s device files playback capability is not yet widely rolled out just yet Hopefully, we can expect it to make its way to a final release of the app via an OTA update in the coming week. Now, all we need is library integration between Play Music and YouTube Music, but we may have to wait a while before that happens.