The Indian smartphone market has witnessed unprecedented growth in the past four years thanks to the nationwide 4G penetration and easy availability of low-cost 4G-ready devices. It hasn't gone unnoticed, and several tech companies are focussing on the Indian market, from where "the next billion" users will come from. Google has launched several products tailored for the Indian audience, ranging from their payment portal called Google Tez, to Crowdsource; an app that helps the Google Assistant function better in the country.

The latest offering Google has for the Indian market is the ability for students to look up their exam scores for competitive exams directly, eliminating the need of the previously used slow and unreliable websites that were used earlier. Over 260 million students who appear for competitive exams annually stand to benefit from it. According to Google's blog post:

Exams are an integral part of an Indian student's academic journey and have a profound impact on their lives. Over 260 million students in India spend countless hours preparing for exams and eagerly await the moment that results are announced. They turn to the internet for all their exam needs, but often this information is hard to locate, and slow to load. To improve the exam experience for students, Google today is announcing two new features to make finding exam information easier and more reliable.

Students can now look up results for JEE (Joint Entrance Exam) directly by entering their roll number and date of birth into after searching for "JEE main results" on Google. It is one of the most competitive exams in the country, as it determines candidates' eligibility to get admission into India's best engineering institutes (fun fact: Sundar Pichai is an IIT Madras alumni). Google partnered with the CBSE (Central Board of Secondary Education) to make results available online as soon as they're published. 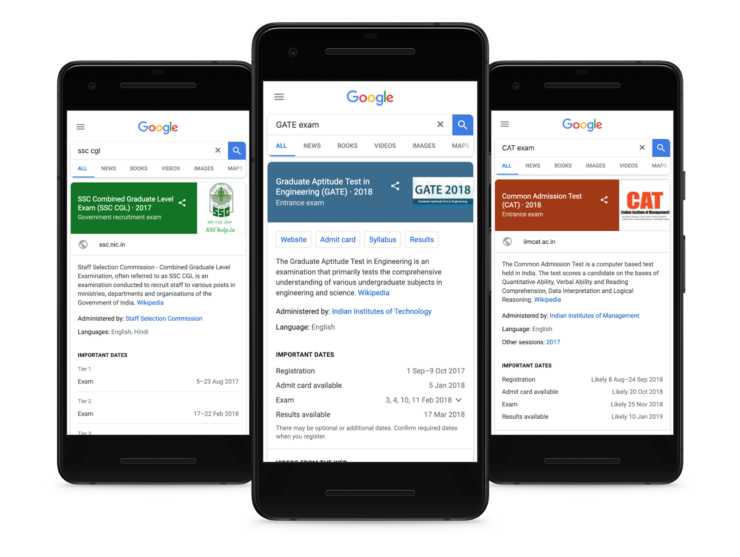 Additionally, the Knowledge Graph card features a link to confirm the results on the official JEE site. Google has ensured that the data is handled securely and used only for the Knowledge Graph feature, with the scores deleted after users are finished viewing it. Support for other major competitive exams such as GATE, SSC CGL, CAT, and others are in the works and will be added soon.