We are all familiar with the Dead Rising franchise, where the story is centric around an American protagonist in an environment full of endless zombies making plans to escape but now Yakuza is taking on Dead Rising in their latest game Yakuza: Dead Souls. The trailer shows us that this is more or less Dead Rising style gameplay but Yakuza style. 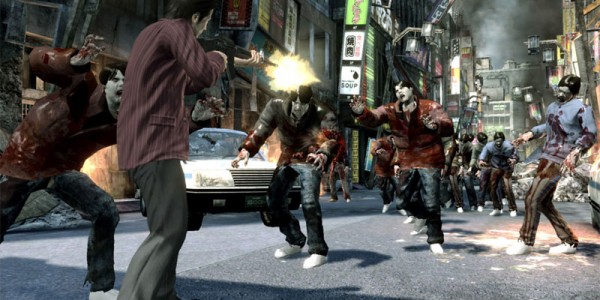 Yakuza has been around since the PlayStation 2 days and has always been an action adventure fighting game with a story in between but what if you throw all of that out of the window and make the protagonist along with other characters fight for their lives in the city of Japan against hordes of zombies and other mutated creatures? Armed with an arsenal of weapons ranging from rifles to grenades and even vehicles the Yakuza could be on their greatest survival challenge yet.

It looks like Chuck Greene and Frank West have a bit of competition on their hands but considering the game is a PlayStation 3 exclusive title I would say the fight will only be restricted to one platform in what could be a great game of 2012 but of course 2012 is full of other great titles too which will definitely keep all of us distracted from exclusives and make us play more mutliplatform games such as Mass Effect 3, Bioshock Infinite and Alan Wake (PC and American Nightmare on the 360) are only a few to name.