Over the past couple of months, we've seen a lot of rumors surface for the Samsung Galaxy Note 9.  Initially, these sounded promising as sources expected the phablet to carry virtual fingerprint recognition, a feature that is proving quite elusive as far as Samsung is concerned.

Naturally, things became clearer as time elapsed with sources retracting their earlier claims. Another device that is a regular on the rumor mill these days is the Xiaomi Mi7. Today, we've got some rather intriguing corroboration for the flagship smartphone. Head over below to find out more.

Alleged Retail Box Leak Corroborates Rumors That Xiaomi Might Launch A 'Mi8' This Year Instead Of The Xiaomi Mi7; Claims Further Validated By An Official Eighth Anniversary Community

Both Xiaomi and the rumor mill are very active this year. The former was quick to launch an upgrade for its Mi Mix 2, to ensure that the lineup is able to keep up with its competition in terms of camera specifications. The latter is very busy for the Xiaomi Mi7; so much so that new details suggest Xiaomi will skip the moniker and launch a Xiaomi Mi8 instead.

As far as specifications go, a multitude of sources have big expectations for the Xiaomi Mi7. The device is rumored to feature both virtual fingerprint recognition and facial recognition. If true, then these features will ensure that Xiaomi moves ahead miles of what is currently available on the market.

Today, we've got an alleged retail box leak that provides more support for claims that Xiaomi will skip the Mi7 moniker and launch its 2018 flagship smartphone titled as the 'Xiaomi Mi8'. 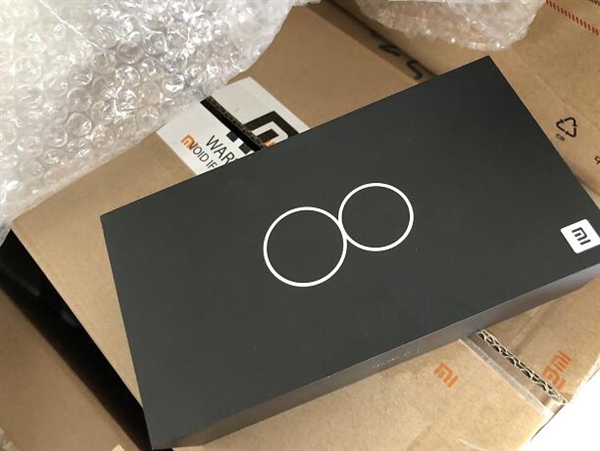 As you can see above, the box is quite different from the Mi6's and takes a more sober and serious approach. Sadly, today's leak provides us with little additional details except for a first look at the Mi8's alleged retail package. Rumors for Xiaomi's decision to launch the Mi8 instead of the Xiaomi Mi7 are fresh so we'd advise you to wait for more information before reaching concrete conclusions.

That being said, today's source also believes that Xiaomi will launch the Mi8 at the end of this. month, which will indicate a slight delay from the manufacturer's schedule last year. The Xiaomi Mi7 is rumored to run on Qualcomm Snapdragon 845, carry 6GB RAM and more importantly, 3D facial recognition. Right now, sources expect Xiaomi to cram as many features as it can into the device.

Of course, this is highly impractical and therefore not likely. Finally, we might get two flagships fro Xiaomi's end. Firmware investigation that surfaced two months back claimed that the company has two devices in the works, a Mi7 and a Mi7 Plus. Will the latter turn out as the Mi8? We'll find out soon enough. Till then, stay tuned and let us know what you think in the comments section below.