The 108MP HMX sensor co-developed by Samsung and Xiaomi has now made an on the latter’s Mi CC9 Pro which was unveiled today. The phone has a penta-lens camera setup on the back and making it affordable also means that a lot of customers will possess access to an advanced and portable optics solution. What’s even more impressive about this penta-lens camera system is that the Xiaomi Mi CC9 Pro DxOMark scores are out already, giving the latest smartphone the top spot in the conclusion.

Before diving into the Xiaomi Mi CC9 Pro DxOMark scores, let’s talk about the camera specifications. The variant that was tested is the Mi CC9 Pro Premium Edition. The primary camera is the aforementioned 108MP Quad-Bayer sensor that produces 27MP pixel binned images. It is flanked by a 20MP ultra-wide camera, one short telephoto unit that has a resolution of 12MP and offers 2x zoom, a long 5MP telephoto unit with 5x optical zoom, and a macro camera that the DxOMark test doesn’t cover, for some strange reason.

The Xiaomi Mi CC9 Pro DxOMark overall camera score is 121, which happens to be the highest ever. Previously, the Huawei Mate 30 Pro also earned the same overall score. However, when we dig a little deeper, that’s where the differences start to appear. When talking about the imaging score, the Mate 30 Pro wins with 132 points, as Xiaomi’s latest handset managed to get 130, which of course is still impressive. We wonder if the score would have been higher had the macro unit being taken into account too. 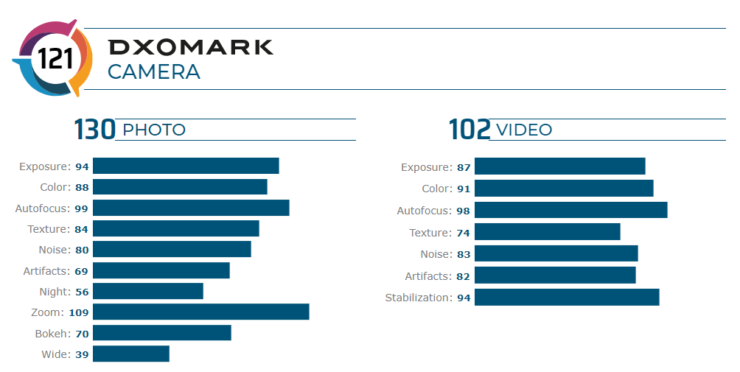 Moving on, let’s talk about what else the Xiaomi Mi CC9 Pro DxOMark test has revealed. With 102 points, the Mi CC9 Pro Premium Edition has also toppled the Google Pixel 4 and Samsung Note 10 Plus 5G to become the highest scorer ever in the video test. According to the latest results, the phone pretty much looks like an absolute winner for those who want a great camera system at an affordable price.

Commenting on the results, DxOMark did state that these tests were carried out using the Mi CC9 Pro Premium Edition, which produces excellent results in most situations. It has been praised for accurate exposures, detailed preservation, and noise control. However, there is a pinkish color cast on images sometimes and there is room for improvement for highlights too. Similarly, while the phone is pretty great when it comes to videos, dynamic range is said to be limited and there is some color fringing too.

But hey, we aren’t nitpicking as Xiaomi has done a pretty remarkable job and with the company having opened up an R&D center for camera research in Finland, we can expect even better camera smartphones in the future. Keep in mind that DxOMark has yet to release the iPhone 11 Pro Max results, which it will on November 7, so let us wait and see if Apple’s latest and greatest flagship has an optics configuration that can topple both the Xiaomi Mi CC9 Pro and Huawei Mate 30 Pro in the upcoming results.