Xbox One 1440p support for Xbox One S and Xbox One X has been rolled out for Xbox insiders in the Alpha Ring.

Support for the ‘QHD’ resolution is included with the Xbox Spring update which has now been deployed for a select number of Xbox insiders. Other new features included with this update are smarter feeds, ‘Share Controller’ through Mixer, and more. For more details about this update, check out the official blog post right here. We’ve included the notes regarding 1440p support down below: 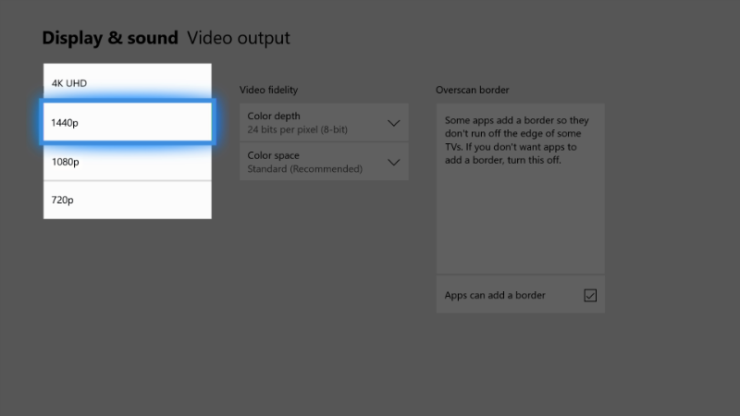 Support for 1440p Video Output
Xbox One X and Xbox One S now support output at 1440p resolution for games and media; 1440p resolution, sometimes referred to as “2560x1440” and “QHD,” is a popular choice for PC users. With over a million and a half more pixels than 1080p, this resolution fills the gap between Full HD and 4K displays

Microsoft engineer Kevin Gammill already said that 1440p support for Xbox One would arrive “very soon” last month. “Many questions recently around the timing of our 1440p support”, he tweeted.” Those of you in our early preview ring should be pleasantly surprised very soon if you have an Xbox One S or Xbox One X.”

As said, the update is currently only available for insiders in the Alpha Ring, but will eventually be released to all Xbox One users.