PS4's massive sales are making headlines all over the gaming sphere. Statistically speaking If Xbox wants to catch up and not loose the sales race, it needs 330% the amount of First Month Xbox 360 Sales packed into One Day.

PS4 Packed 5 Times First Month Sales (PS3) in One Day - Xbox One needs to do the same by 3.3 Times to Play Catch Up

However increasing your production by 3.3 Times as compared to 5 Times should be easier relatively speaking. Microsoft had a headstart in Xbox 360 but it doesnt in Xbox One. Needless to say the eyes of the world are more watchful than ever. Also theoretically speaking the actual challenge would be to match the PS4 Sales rate. I.e 500%. If Micrsosft Actually manages that, then it will sell an astonishing number of units on Day One. 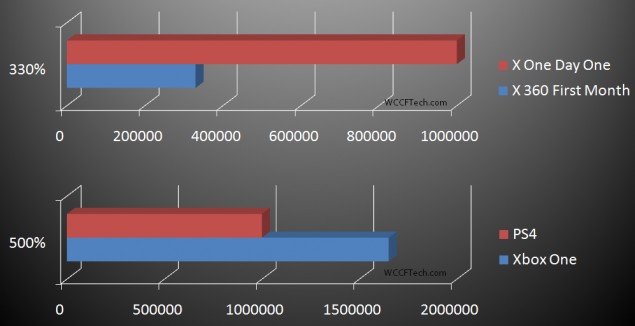 Of course all this is well and good on text, real practicality is something else entirely. Any impressive sounding number crunching translated to real life is worse than useless. However the modern sales graph is an exponentially decreasing function. By definition the first day is the opposite of an average. The first day includes Pre Orders and other variables and Marginal Utility. The Law of Diminishing Marginal Utility and tons of other handicaps apply after the first day. To put it in Lay mans terms, the first Day is very important and a major chunk of sales in the foreseeable future and realistically speaking the sales of the first day can never repeated. This is also why you can realistically squeeze an entire months sales in one day. Fingers crossed for 22 November eh?

#XboxOne Day One Sales Analysis and Estimates - As reliable as weather forecasts and about as useful to anyone. http://t.co/tOmApOMwJ7