Update: Some places are offering good discounts on Xbox One games owing to Green Monday Deals.

The latest Xbox One game deals involve the renowned computer manufacturer Dell, which is offering huge savings on Xbox One games. As of now, the company offers titles like Ryse: Son of Rome and Forza 5 on its website. The deal offers the game at a low price of $39.99. These games which have original costs of $59.99 and $49.99 are being sold at an amazing discount at instant pricing with no minimum basket cost. The link to the store can be found here.

You also get a Dell Promo e-Gift Card worth $25 which can be used at the online dell store only which has several other options at discount to choose from. The e-Gift Cards has to be spent in the 90 days or its gets expired it normally takes 10-20 days to receive from Dell.

The Xbox One console has had a rocky year with a late last year launch of $499 and falling to as low as $329 a piece couple of weeks earlier. The console recently has bee selling for around $349 with kinect and live television subscription. The console has been getting cheaper but the games have not and have to be bought at ridiculous prices had it not been for the upcoming sales.

The Green Monday sale is quite scattered and there is no direction to where the sale is leading but Gamespot has also has some decent deals. It is selling NBA 2K15 for $49.99 and other games like Dead Rising 3 Apocalypse Edition, For a Motorsport 5 Racing Game of the Year Edition, Ryse: Son of Rome Legendary Edition, Metro Redux and Sunset Overdrive have a price tag of $ 39.99. Although there is no gift card at Gamespot nor is the deal as attractive as Dell. But it does help those who are not accustomed to buying online, as Gamespot has several stores for that sole purpose but that does not mean that there is no option of online buying at Gamespot. 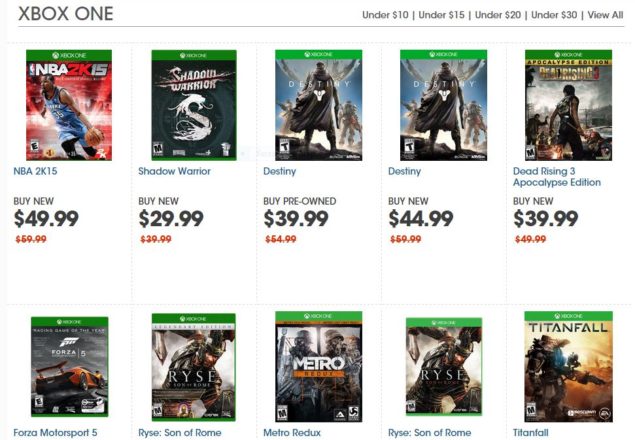 Both these offers are physical copies of the game which have to have a minor install and the disc will also be needed before the game can be run on the console. Hence they can't be shared digitally and players wont have to worry much about low spaces in their consoles and the game discs can also be traded on websites like Gamespot for credit towards games/accessories. No notable deals are being offered at the Xbox store of the Microsoft store.