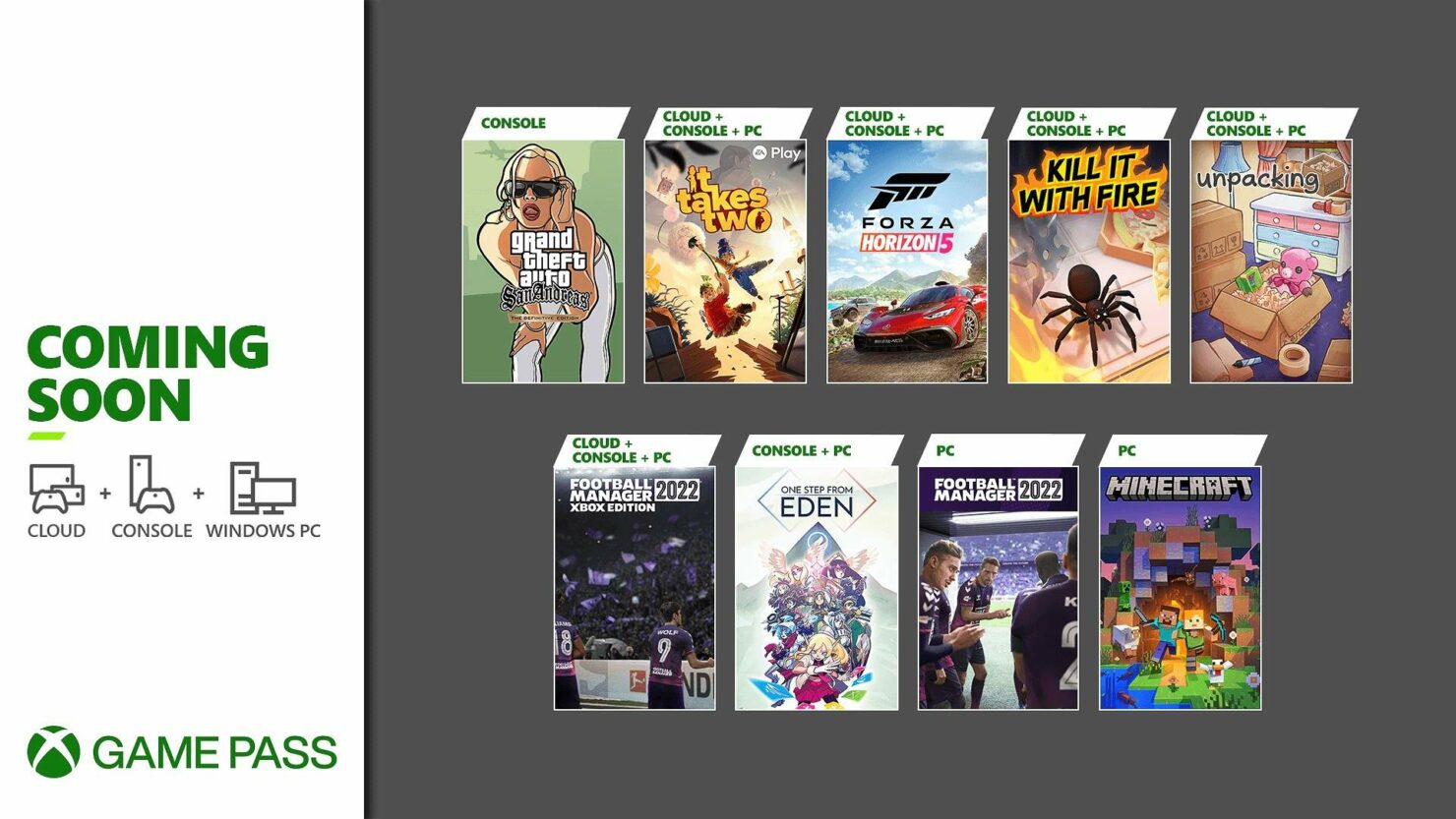 Microsoft has announced the next batch of new Xbox Game Pass games across console, PC, and Xcloud.

We already knew about some of the new titles which will be joining Microsoft’s gaming subscription service later this month, but Microsoft has now unveiled its full lineup for November.

Arriving tomorrow for PC is Minecraft: Java and Bedrock Editions alongside Unpacking across PC, console, and Xcloud. On November 4th, It Takes Two will arrive on console, PC, and Xcloud alongside indie title “Kill it With Fire”.

On November 11th, console players will be able to check out Grand Theft Auto: San Andreas – The Definitive Edition. In addition, Microsoft is adding indie game “One Step from Eden” on PC and console on this day as well.

Get your computer ready because Minecraft is coming to Game Pass for PC! Play Minecraft: Java Edition and Minecraft: Bedrock Edition on Windows 10 and 11 as part of your Xbox Game Pass for PC or Ultimate membership. That also means you can conveniently cross-play with any current Minecraft version, including consoles and mobile! Just launch the same edition as the Minecrafter you want to play with. No need to pick and choose — experience Minecraft on PC in one launcher with Game Pass.

Available day one with Xbox Game Pass: Moving day is here! Unpack like never before in this zen puzzle game where you’ll learn about a character through a variety of moves. Unpacking weaves together a story through the everyday and sentimental belongings you’ll encounter as you decorate and organize each new space throughout the game.

Go on a wild co-op adventure with EA Play as It Takes Two joins Xbox Game Pass for PC & Ultimate via The Play List. Discover a metaphorical merging of gameplay and narrative in a light-hearted story of the hardships in getting along. And you can invite a friend to join the adventure with Friend’s Pass!

Kill It with Fire (Cloud, Console, and PC) ID@Xbox – November 4

Kill It with Fire is a first-person action game about hunting spiders and causing collateral damage. Assemble your arsenal of increasingly excessive weapons, track spiders across suburbia, and burn everything in your path!

Available day one with Xbox Game Pass: The closest thing to being a real football manager. Football Manager 2022 brings new, progressive ways to find your winning edge, instill your footballing style and earn it on the pitch with your football club. Experience complete football authenticity and unrivaled simulation gaming.

Available day one with Xbox Game Pass: Navigate your way to the top of the footballing world as the boss of the world’s greatest football teams in a tailored version of Football Manager that’s been adapted for console play on the biggest stage. Build your dream squad and make the club completely your own as you develop your career to become a managerial great. Plus, Ultimate members can play with Cloud Gaming featuring Xbox touch controls on day one, no controller needed!

Available day one with Xbox Game Pass: Your Ultimate Horizon Adventure awaits! Explore the vibrant and ever-evolving open-world landscapes of Mexico with limitless, fun driving action in hundreds of the world’s greatest cars. Lead breathtaking expeditions across a world of striking contrast and beauty while immersing yourself in a deep campaign with hundreds of challenges that reward you for engaging in the activities you love.

One Step from Eden (Console and PC) ID@Xbox – November 11

One Step from Eden combines deck-building and real-time action with rogue-like elements, giving you the chance to carve a path of mercy or destruction. Fight alone or with a friend in co-op as you cast powerful spells on the fly, battle evolving enemies, and collect game-changing artifacts. Can you make it to Eden?

There are also several DLCs and game updates being added to the service, including the new Doom Eternal Horde mode and the new 6.66 update.

Be sure to check out the official Xbox blog for the full details.