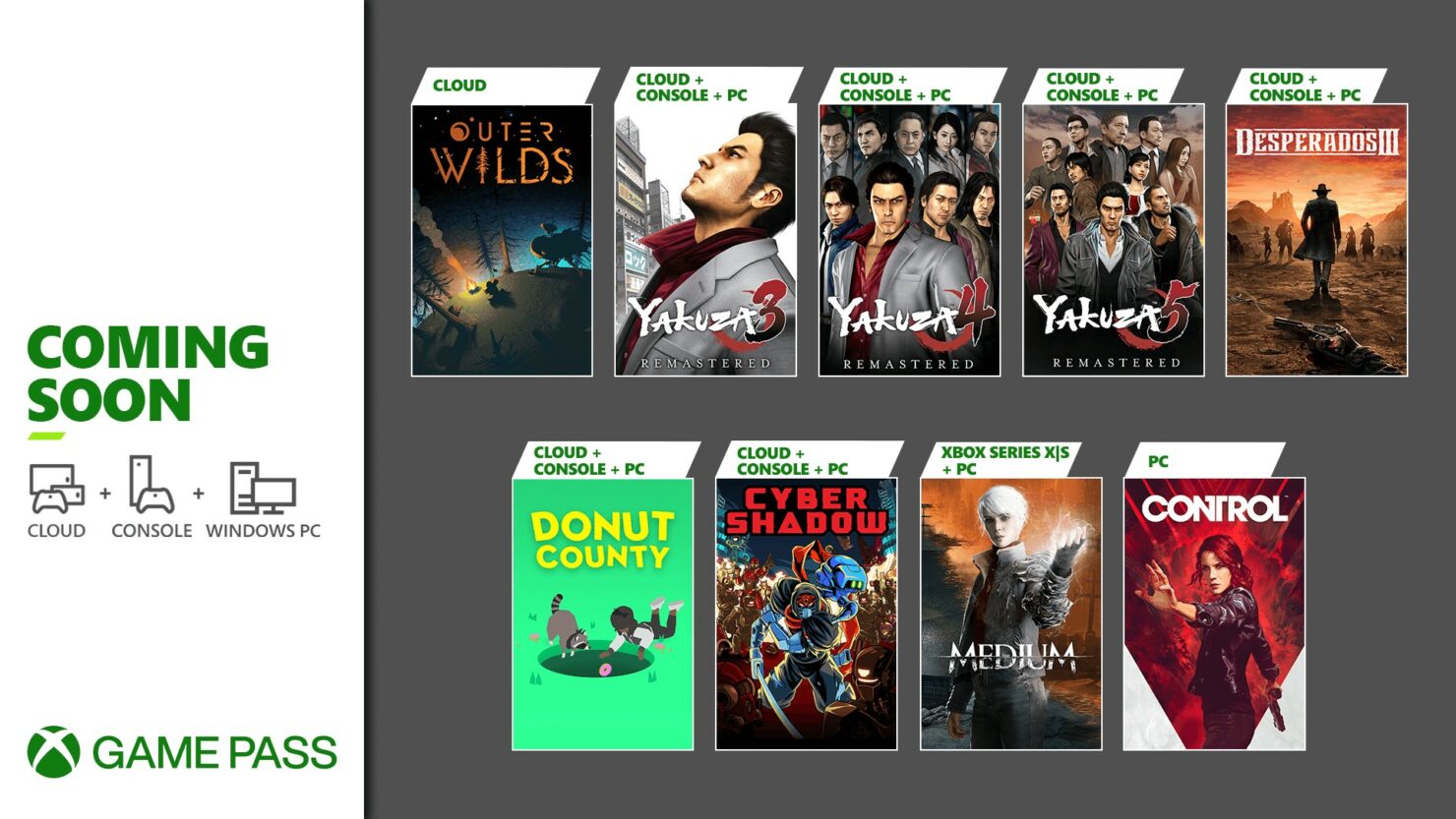 If you're still looking for something new to play as an Xbox owner after the holidays, Microsoft just dropped a nice little gaming bomb for you. There's a set of newly-announced games coming to Xbox Game Pass for Console and PC in late January, and some of the standouts include Control for PC, The Yakuza Remastered Collection for Android, console, and PC, and Outer Wilds for Android.

Starting January 21, Xbox Game Pass users across multiple platforms will have plenty to look forward to. On that day alone, Control is headed to the PC version of Game Pass, along with Desperados III and Donut County to Android, console, and PC. Finally, Outer Wilds will make its way to Android. Here's a rundown of each of the titles by way of Microsoft.

Control (PC) – After a secretive agency in New York is invaded by an otherworldly threat, you become the Director struggling to regain control. This third-person, action-adventure game will challenge you to master a combination of supernatural abilities that will keep you on the edge of your seat.
Desperados III (Android, Console, and PC) – Desperados III is the long-awaited prequel to Desperados: Wanted Dead or Alive. A story-driven, tactical stealth game featuring a colorful cast of characters that epitomize the Wild West, Desperados III takes players on an adventure through rural towns, swamps, and riverbanks, to their ultimate, gun-slinging showdown!
Donut County (Android, Console, and PC ID@Xbox) – Donut County is a story-based, physics puzzle game where you play as an ever-growing hole in the ground. Meet cute characters, steal their trash, and throw them in a hole.
Outer Wilds (Android) ID@Xbox – Explore for the sake of your curiosity with a hand-crafted solar system filled with secrets to discover and perils to avoid while exploring space. Players are given a variety of tools to aid in their space-backpacking adventure: their very own spaceship and jetpack, a surveyor probe for scouting and taking pictures, and a signal scope to track down audio signals as well as view landmarks from afar.

On January 26, Cyber Shadow will be headed to Android, console, and PC.

Cyber Shadow (Android, Console, and PC) ID@Xbox – The world has been taken over by synthetic lifeforms. A desperate plea for help sets Shadow on a journey to uncover what started the path to perpetual ruin. Slash through the techno hordes, leap past traps, and nimbly navigate the ruins of Mekacity. Only you can unlock the secrets to your clan’s ancient powers in Cyber Shadow, the quintessential Ninja Action game.

On January 28, The Medium will be headed to Xbox Game Pass users on Xbox Series X, Xbox Series S, and PC. And finally, The Yakuza Remastered Collection will be available on Android, console, and PC, including Yakuza 3 Remastered, Yakuza 4 Remastered, and Yakuza 5 Remastered.

The Medium (Xbox Series X|S and PC) ID@Xbox – Available with Xbox Game Pass on day one! Discover a dark mystery only a medium can solve. Travel to an abandoned hotel resort and use your unique psychic abilities to uncover its deeply disturbing secrets, solve dual-reality puzzles, survive encounters with sinister spirits, and explore two realities at the same time.
The Yakuza Remastered Collection
Yakuza 3 Remastered (Android, Console, and PC) – In a quest to abandon their bloody past, Kazuma Kiryu and adoptive daughter Haruka Sawamura leave the unforgiving streets of Kamurocho for the island of Okinawa to run the Morning Glory Orphanage. Despite his efforts, trouble shadows Kiryu and the oorphanage is soon entangled in a deadly power struggle. Can Kiryu rescue the children’s home and escape his past for good?
Yakuza 4 Remastered (Android, Console, and PC) – A murder in Tojo Clan territory soon sets off an investigation by a small Tojo branch consisting of Kazuma Kiryu, Masayoshi Tanimura, Shun Akiyama, and Taiga Saejima. Follow the four playable protagonists as they unravel a hidden battle over money, power, status, and honor and a mysterious woman at the center of it all. With underground forces readily willing to kill to protect their secrets, the search seems to lead to more questions than answers.
Yakuza 5 Remastered (Android, Console, and PC) – Kazuma Kiryu’s newfound calm as an unassuming cab driver comes to a sudden end as the standing peace between the Tojo Clan and Omi Alliance disintegrates. Forced to reckon with his past once more, the Dragon of Dojima returns to the criminal underworld to protect those he holds dear. With five playable protagonists across five major cities, follow Kiryu and his allies in their quest to navigate the corrupt underbelly and prevent an all-out turf war.

Xbox Game Pass subscribers have plenty to look forward to.

However, there will be a few games leaving on January 29 as well, so it's important to take note of those:

Might be a good time to finally tear into Final Fantasy XV.