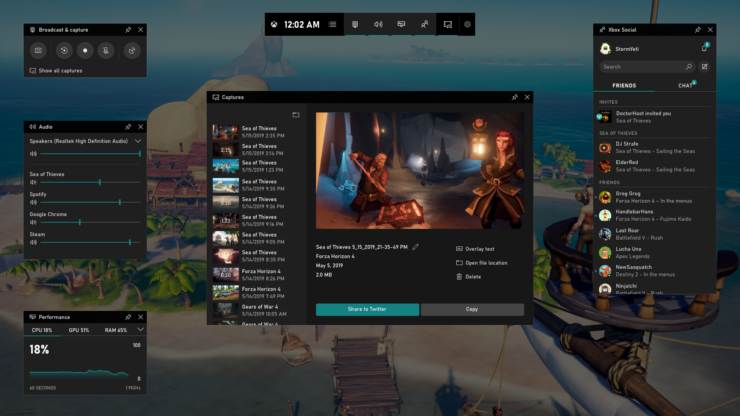 So, I've used the Xbox Game Bar a few times in the past. Primarily when a game won't let me capture using Fraps or OBS. That's about the only real function I've had from the game bar in the past. Also, it's come up unwanted when I may have accidentally pressed Win + G together.

Why have I only used it for that in the past? Mostly limitations in its features. This is looking to be changed with a host of new features in the new and updated game bar, which allows for a host of customisation options, as well as includes elements like Spotify integration, broadcast and capturing as well as new Looking For Group (LFG) elements.

Here are the new features of the Xbox Game Bar as stated by Microsoft themselves:

Spotify
Like many of you, we believe music is a very important part of the gaming experience. Now you can easily control music and podcasts on Spotify from the Spotify widget in the Xbox Game Bar, including favoriting, shuffling and selecting playlists recommended for you by Spotify. You’ll need the Spotify app for Windows installed to take advantage of this new feature, so be sure to get it from the Microsoft Store or Spotify.com.

Friends, Chat, Mixer, and Looking for Group (LFG)
The social features in Xbox Game Bar allow you to have conversations with friends who play on PC, Xbox One, and mobile, as well as watch their Mixer streams and send them your creations instantly. Players can use the Looking for Group (LFG) feature on Xbox Game Bar to find new teammates or a raid party with a common play style, all without using a third-party site. Gamers can chat with their friends, using voice or text, in Xbox Game Bar across Xbox One, mobile apps, and PC. Conversations are synced on all Xbox apps, so keep chatting after the game to share memes and coordinate your next session.

Broadcast & Capture
Back in December, we promised to make it simple to capture your epic gaming moments. Currently, you can easily capture and view your gameplay screenshots, then share directly to Twitter without leaving your game.

It's the accessibility of these new features that seems the most important, including never needing to alt-tab out to use such as Spotify or change the volume of what you're listening to, perfect if you're on a simulation game listening to something in the background. All of this thanks to the customisation options of the widgets, letting you simply bring the bar up and make the change in a fraction of the time.

What is likely the most important new feature is LFG. Allowing you to find new players for any game, plus the chat options with others on your Xbox friends list. With the new features being available natively for any game running on your Windows 10 PC, it does seem that Microsoft is truly trying to push themselves forward for PC games.