The Xbox 360, despite being old in gaming terms, is not being neglected or left in a dark dusty corner by Microsoft. Major Nelson recently posted on his blog that a future update will add support for larger external hard drives, up to 2TB a piece or 4TB total. 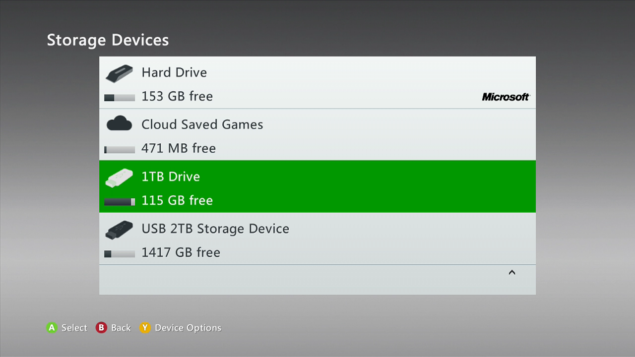 It looks like the Xbox 360 is still relevant in terms of an awesome gaming experience, and Microsoft understands that. If you're a member of the Preview Program then you can download the update and enjoy a substantial increase in storage space.

Major Nelson does note, however, that some drives may not necessarily be completely compatible and might have some performance issues right now. But this isn't the final update anyway, so issues and bugs are expected.

Make sure to reserve space for the drive, and if you already have, then you might need to clear the drive completely before it'll be fully recognized and accessible. Aside from that if there are any other issues, Microsoft of course invites you to give feedback so they can make sure this works correctly.

As a reminder, the best way to recommend changes and improvements to the Xbox One or 360 is through the Xbox Feedback website. We appreciate your feedback and continue to work on improving the Xbox experience.

This is fantastic that they're finally recognizing and fixing one of the largest and most glaring issues that the Xbox 360 had. Larger game files meant that you had to ration your storage for only the current games you wanted to play. That seems like the logical thing to do anyway, but it's nice to be able to transition to a rare gem you have installed. That and who doesn't want to be able to say that you have 4TB of storage?