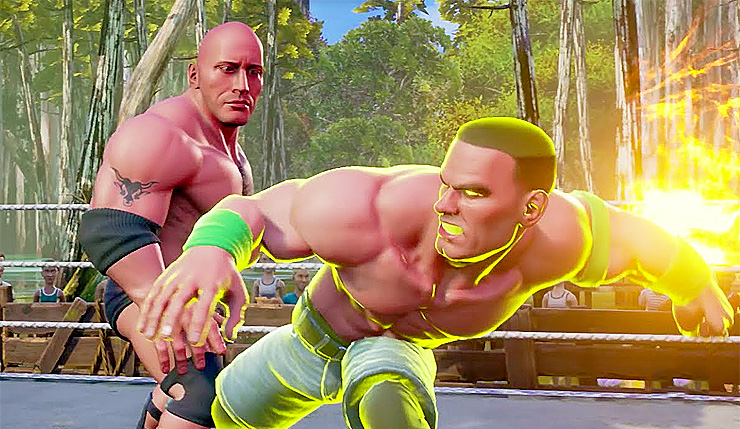 As we recently reported, WWE 2K21 has been cancelled after WWE 2K20 dropped an epic dump in the ring, but, as rumored, wrestling fans won’t be completely without a new game this year. 2K Games has announced WWE 2K Battlegrounds, a new arcade-style brawler that will apparently let players throw John Cena into a giant alligator’s mouth. Don’t believe me? Check the game's first teaser trailer, below.

Yeah, not the most visually impressive game (What have they done to poor Becky Lynch?), but WWE 2K Battlegrounds is being developed by the talented folks at Saber Interactive, so there’s a good chance it could actually deliver some decent action. As long as 2K sets a reasonable price point (no more than $15 bucks I’d say) Battlegrounds may be worth looking into.

2K has also provided an update on their future plans for the core WWE 2K franchise. Most notably, they’ve announced Patrick Gilmore, who has producer credits on 2013’s Killer Instinct and Amazon’s New World, will be heading up 2K’s next wrasslin’ sim…

We are applying what we’ve learned to the next WWE 2K simulation game with a renewed focus on quality and fun. As part of that commitment, we are extending the production timeline and will not be releasing a WWE 2K simulation game in 2020 (T2 fiscal year 2021). We want to ensure the development team at Visual Concepts can create a great game that will entertain grizzled WWE 2K veterans, as well as newcomers who want to climb through the ropes and step into the ring for the very first time.

We’ve recruited Patrick Gilmore to serve as our new Executive Producer and lead these efforts at Visual Concepts. Patrick has over 25 years of experience in video games, reaching all the way back to Disney’s Aladdin on Sega Genesis, and including franchises like Killer Instinct, Medal of Honor, and, most recently, Amazon’s New World. He will be overseeing WWE 2K development, and you’ll be hearing more from him and the team in the months to come. We hope you find this news as exciting as we do. We are confident it will lead to better games in the future.

The hiring of a fighting game vet like Patrick Gilmore tells me 2K and Visual Concepts realize they need to tighten up their core in-ring action, which gives me some glimmer of hope about the future of the WWE 2K series. I hope WWE 2K22 (or whatever the series is called when it returns) is a proper reset – the series has been stale (or worse) for a solid decade now. Time to start fresh.

WWE 2K Battlegrounds launches sometime this fall. Oddly, platforms have yet to be announced.