2019 has been a year of upheaval for WWE. The company has been stuck in a rut, producing the same mostly-predictable content for years, but recently they’ve been forced to make behind-the-scenes changes to their creative process in the face of declining ratings, new competition, and Smackdown’s move to Fox Sports. It remains to be seen whether WWE will be able to successfully face down their current challenges, but at the moment, the situation doesn’t seem terribly promising (anybody who watched Hell in a Cell this year knows what I’m talking about).

It seems 2019 is also a year of change for WWE video games. The WWE 2K franchise has been stuck in its own comfortable rut for a while, but this year longtime developer Yuke’s (they’ve been making WWE games for 20 years) departed, leaving Visual Concepts in sole control of the series. So, was Yuke’s holding the series back all along? Or will 2K Games ultimately regret the breakup of the Visual Concepts/Yuke’s tag team? Pull on your spandex, it’s time to find out…

WWE 2K20’s core in-ring action hasn’t changed much since last year. It sticks to the basic punch, kick, normal grapple, strong grapple system that wrestling games have been using since the mid-90s. As I’ve complained for the past umpteenth years, the system also remains far too fixated on reversals. WWE 2K20 doesn’t give you the ability to block or evade attacks – tapping the reversal button at just the right second is usually the only way to change the course of a match, essentially turning them into extended quick time events. WWE 2K20 does bring back last year’s Payback system, which adds a small amount of depth to the proceedings. Absorb enough damage and you’ll earn a special ability, including instant finishers, automatic, no-fail reversals, or various buffs. This gives you a limited opportunity to change the momentum of a match even if the AI is being a right bastard and reversing everything you do. I was hoping the Payback system would be expanded this year, but it’s more or less unchanged.

So, has the action been upgraded at all? Well, the button layout has been improved a bit, and it feels like the timing on reversals is more forgiving. That said, any positive gains are eradicated by WWE 2K20’s extreme jankiness. If you’ve been on the Internet the past week, you’ve no doubt seen GIFs of wrestlers perpetually spinning like logs, glitching through the ring, or transforming into Medusa-like monsters. I can attest this stuff is common, and sometimes kinda funny, but more often than not, the glitchiness is just plain annoying. Controls feel extra sluggish, and will sometimes stop responding at all or cause you to do the wrong moves. Frequently I’d randomly lose the ability to counter. The game’s AI is barely functional in regular matches, and outright fizzles out if you’re playing something more novel like a ladder match. This game is right on the edge of being unplayable.

And yes, the game is absolutely ghastly looking. Apparently, 2K lost the scans they did of the WWE roster in the divorce from Yuke’s and hired the old lady who messed up that Jesus fresco to redo the faces by hand. I mean, how else to explain the fact that Becky Lynch, the game’s cover star, looks like this?

For the sake of comparison, here’s what Randy Orton looked like in WWE 2K18.

There are a small handful of wrestlers that escape the uglification -- the Undertaker and Triple H look like themselves, but they’re the exception. If I had to compliment one aspect of the WWE 2K20’s presentation, I would say the series’ legendarily awful commentary is…a little better this year. It feels a bit more natural, and I actually chuckled at a couple of lines, but it’s still sloppily implemented. Commentators often start talking about stuff completely disconnected to what’s happening on screen and will repeat certain phrases ad nauseam. I suppose it's somewhat true to life in that respect.

It’s a shame WWE 2K20 is such a technical fiasco, because it does bring a few welcome new features to the table, most notably the long-awaited full integration the women’s roster. This year the ladies get their own Showcase focused on the Four Horsewomen of NXT (Charlotte Flair, Becky Lynch, Sasha Banks, and Bayley) and are part of MyCareer mode.

The Women’s Evolution Showcase is probably the most competent, polished part of WWE 2K20, but that isn’t saying much. Its live-action documentary bits are okay, but not as well put together as some past years, and the matches suffer from the same issue Showcase mode has always had. Battles like Charlotte vs. Sasha Bank’s Hell in a Cell match or the historic Ronda Rousey vs. Becky Lynch vs. Charlotte WrestleMania 35 main event are recreated in exacting detail, which ends up being the problem. Each match requires you to check off a long list of objectives, and often you end up losing matches simply because you couldn’t maneuver your opponent into a very specific spot for a very specific move. WWE 2K20 loads on more objectives than ever before and constantly switching between characters (instead of sticking to one like in last year’s Daniel Bryan Showcase) means you’re always having to check on how to do certain required moves. I wanted to like this year’s Showcase, but it quickly started to feel like homework.

This year’s MyCareer mode is, well, interesting. At least it is if you’re able to access the mode without it crashing. I managed to break the create-a-wrestler, giving my female MyPlayer a grotesque alien eye on a stalk (perhaps she’s related to Jar Jar Binks), but the game would crash every time I attempted to start a career with her. I got rid of the weird eye and tried again, but more crashes. After some online research I discovered MyCareer will crash if you put any sort of logo on your MyPlayers. So, I got rid of the logos and finally MyCareer loaded, but when I tried to alter my wresters’ move sets, more crashes. I’m not exaggerating when I say it took me two to three hours and probably 20 crashes before I managed to get started on my career with characters I was reasonably happy with. And then, the game crashed again within about 20 minutes. Just a little taste of the WWE 2K20 experience.

Too beautiful for this fallen world

But hey, what’s MyCareer about when it’s not crashing? You play as two characters, Red and Tre, lifelong platonic life mates and hopeless wrestling nerds who dream of making it big in WWE. Interestingly, we begin with Red and Tre preparing to be inducted in the WWE Hall of Fame, with most of the story being told via flashbacks that show how they made it to the top. It’s an interesting setup, that’s undermined by ridiculous writing. At various points throughout the story you’ll have to beat a giant rib in a dance contest, travel through an interdimensional portal to save Undertaker from the “Plains of Purgatory,” and do battle with a cyborg Samoa Joe. No, really. Now, I don’t mind a touch of silliness, but all this nonsense is presented with a snarky, condescending edge. It really feels like WWE 2K20’s writers were embarrassed to be working on a wrestling game. Sure, this year’s MyCareer holds your attention in a “rubbernecking at a car crash” sort of way, but make no mistake, it’s schlock of the highest order.

If you’d rather avoid the goofy story, you can just unlock gear and level up your MyPlayer by competing online, but it’s a tiresome grind. WWE 2K20 doesn’t have microtransactions, but most of its gear is locked away in loot-box-like card packs. Ultimately, the whole MyPlayer thing feels pointless, as all the stuff you’re unlocking is already available in main creation suite. There’s just no compelling reason to spend hours upon hours unlocking stuff that you already have. But hey, at least tinkering around in create-a-wrestler is still amusing. Options for customizing your wrestler’s face are very limited this year, but there’s a seemingly-infinite variety of hairstyles, accessories, and clothes to choose from. Downloading community creations and setting up currently-impossible exhibitions like Kenny Omega vs. Seth Rollins was the most fun I had with WWE 2K20.

And the list of stuff you can do in WWE 2K20 goes on. WWE Universe (basically a stripped-down version of the GM mode from other sports games) returns but remains a little dry for my tastes. 2K Towers provide a decent arcade-style distraction, but aren’t exactly gripping. You can’t accuse WWE 2K20 of having a lack of content, but honestly, I would have been happy with less in this transitional year. Visual Concepts clearly tried to do too much, and their execution fell well short of excellence.

This review was based on a PS4 copy of WWE 2K20 provided by publisher 2K Games. 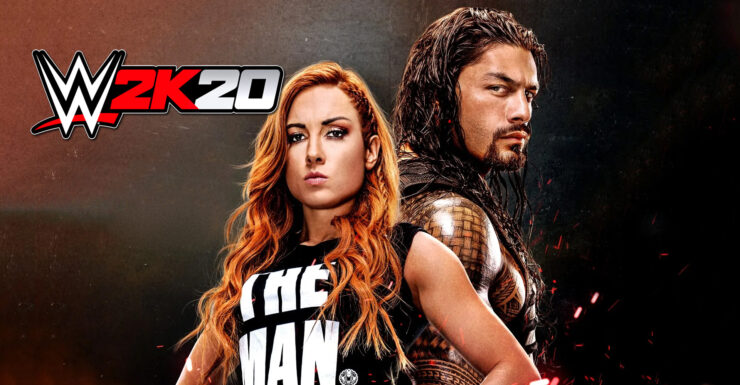