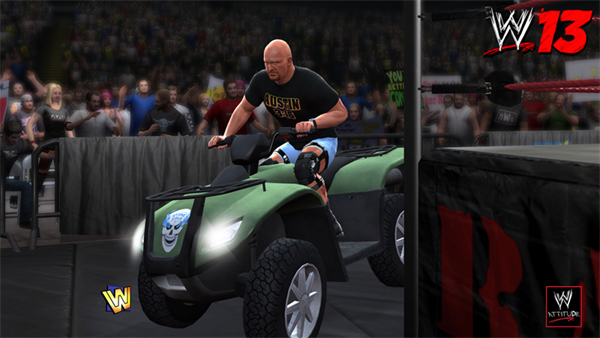 According to Cory Ledesma, Creative Director of WWE Games at THQ, there are no plans for WWE '13 coming to the Wii U, Playstation Vita and Nintendo 3DS. Also, confirmed that matches between the same characters will be possible.

When prompted by a fan on twitter, inquiring about a Wii U release, here is how Cory Ledesna responded:

Joshua: @RealCoryLedesma will #wwe13 be coming to the wii u. please reply

Cory Ledesma gave a similar one word response when asked about the PS Vita. This confirms that the Wii U and the PS Vita is not in THQ's plans for which could be the largest title in the WWE Game's series. WWE '12 was a success for THQ as it was received with a positive response by the community and it seems that Yuke's is doing everything it can to make this the greatest title yet. According to reports, pre-orders for WWE '13 are 170% higher than last year's release. The biggest attraction to this year's title is its setting in the attitude era where pro-wresting gained most of its fan base and became an established form of entertainment.

Furthermore, when asked about duplicate player matches, Cory Ledesma gave a positive response on his twitter. This means that, for example, the player will be able to clash the 'Big Evil' Undertaker against the current 'The Phenom' Undertaker in a match. It seems that there is a special condition to it, both superstars should be from different eras. It is not confirmed whether we will be able to compete using exact same superstars from the same eras.

WWE '13 is set to release on October 30th 2012 in North America on the Playstation 3, Xbox 360 and Nintendo Wii. THQ are slowly revealing the game's roster which would be available in the game at launch. By looking at the empty slots on the roster on THQ's website, it seems that there will be a total number of 84 playable characters. Which will include modern days superstars and attitude era's legends.