World of Warcraft: Battle for Azeroth Gets a Release Date and Physical Collector’s Edition

Get ready to choose sides all over again, as the Alliance/Horde conflict begins anew this summer in World of Warcraft: Battle for Azeroth. Blizzard has just announced a release date and physical Collector’s Edition for World of Warcraft’s anticipated seventh expansion – you can check out a new trailer, below.

The Battle for Azeroth Collector’s Edition includes all the Digital Deluxe Edition goodies (exclusive mounts, a pet, and a character boost to level 110) as well as an Alliance/Horde “storybook” novella, a shiny double-sided Mark of Allegiance medal, an exclusive soundtrack, and, of course, a big ol’ box to keep all your swag in. Blizzard hasn’t revealed a price for the Battle for Azeroth Collector’s Edition yet, but the boxed version of Legion cost $90, so you can probably expect the pricing for Azeroth to be in the same ballpark. 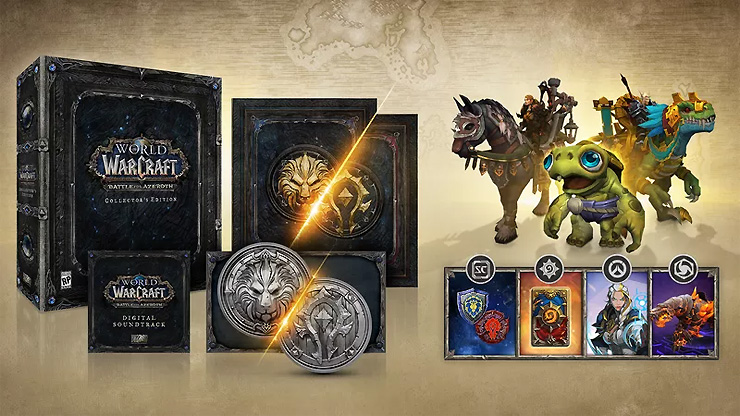 Battle for Azeroth reignites the conflict between World of Warcraft’s Alliance and Horde, which has now escalated into all-out war. Here’s a basic rundown of the plot:

“Azeroth paid a terrible price to end the apocalyptic march of the Legion’s crusade -- but even as the world’s wounds are tended, it is the shattered trust between the Alliance and Horde that may prove hardest to mend. As this age-old conflict reignites, join your allies and champion your faction’s cause. Azeroth’s future will be forged in the fires of war!”

World of Warcraft: Battle for Azeroth launches on PC and Mac on August 14. The Collector’s Edition is scheduled to hit store shelves on the same day. You can pre-order the expansion (which gets you that all-important level boost for free) right here.

BlizzCon 2020 Might Not Be Feasible Warns Blizzard, but Plans Are Still Being Made