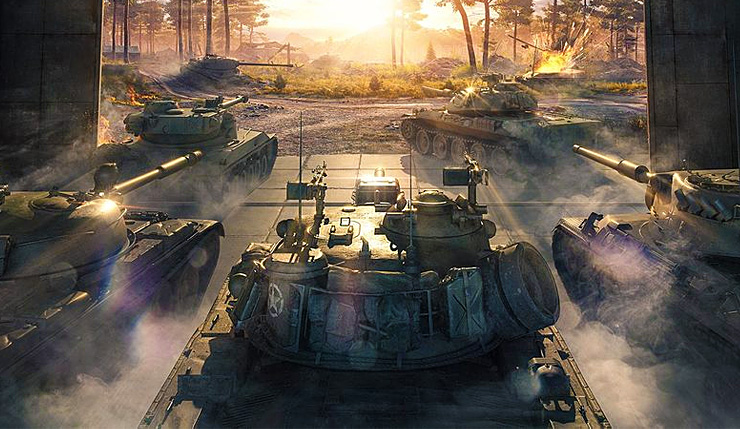 Wargaming Fest: Tanker Day, the annual fan celebration of all things World of Tanks, is currently in full swing, and a plenty of juicy announcements have been made. First and foremost, Wargaming has revealed they’re working closely with Intel to add ray tracing to the game. When the tech is launched, it won’t require a NVIDIA GeForce RTX card – any DirectX 11 compatible GPU will do. Here’s a few more details about the ray tracing tech…

With the introduction of our Ray Tracing (RT) technology—developed at Wargaming with close collaboration with Intel—we can recreate the "main actors" of our game in higher quality; their smallest details will give super-realistic shadows when the sun hits them. Ray Tracing further immerses you in an atmosphere of furious tank combat and provides an even more enjoyable gameplay experience.

Ray Tracing technology will work on all graphics cards that support DirectX 11 API and higher, but only for intact vehicles that are in direct sunlight. You can enable/disable this function in the game settings. The support for brand-new shadows on tanks will be added in the upcoming updates of World of Tanks, after the tests have been completed.

There are also a variety of other features coming to World of Tanks, including new dual-gun tanks and minigames, as well as the return of the annual Halloween event, with an all-new mode featuring a “sinister location” designed by original Silent Hill art director Ito Masahiro. Never thought I’d ever have cause to mention World of Tanks and Silent Hill in the same sentence, but here we are. Get the details, below.

Two mini-games will be available very soon in the game client, both with familiar mechanics. They’ll add to the fun, all while you’re winning tickets to complete your festival collection. We’ll take a closer look at these mini-games in a separate article, so stay tuned!

The Great Race has received a considerable revamp, making it even more enjoyable than when it last appeared in 2014. This time, there will be three tanks to choose from, including the legendary Chaffee from the last edition. The Great Race will also host a five-stage tournament, running from September 23 through October 6.

Dual-gun vehicles are about to enter the closed Supertests. These vehicles will be equipped with two guns, allowing you to shoot both simultaneously and sequentially. We're actively working on the mechanics of these unusual machines, and their concept may change as a result of testing. Keep your eyes peeled for a Developers Diaries video and a dedicated article to be published tomorrow, going into more detail on these unique battle heroes.

During the next iteration of the Sandbox, we plan to test reworked mechanics for dealing damage with HE shells. We're currently testing a system in which the mechanics for dealing damage will be calculated more fairly and become more predictable, both for the player who inflicts it and for the tank hit by a HE shell. All changes from previous Sandbox iterations will be saved. More detailed information on all changes will be published closer to the start of the Sandbox in a dedicated article.

We're going to launch the next iteration of Sandbox mode this autumn. Everyone is eligible to participate and evaluate the modifications we propose -- you just need to download the separate Sandbox client. The changes we're testing are very important to our game, so we would like to once again invite everyone to share their feedback.

This year, World of Tanks will celebrate Halloween once again! Get ready to try out the new exciting PvE mode where you will fight evil in a sinister location that changes throughout the course of the battle. This time, the AI ​opponents will be smarter and more complex.

Bots will have several roles on the battlefield, show individual behaviors, and react differently to your appearance. Some enemies will constantly haunt you if you approach them, others, on the contrary, will try to run away from your tank, luring you deep into the sinister location. Also, you'll face a particularly powerful Archenemy -- unspeakably evil and impressive. This year, Ito Masahiro, the art director of the first three Silent Hill games, participated in the development of the Halloween mode. This guarantees that the atmosphere and visuals of the event will be better than ever!

The anonymizer is a tool that conceals a player's real username in battle. This feature was announced at last year's WG Fest, and is important to our players. The main task of the anonymizer is to maintain a certain privacy in game, and the tool we’re currently working on can solve this issue.

How does it work? You select an option in the game settings and activate the anonymizer. The game generates a random username in each battle. It's not a random string of symbols, but a word that more or less makes sense, so other players won't even notice that you have the anonymizer turned on. They will only realize it after the battle when they want to see your battle statistics.

World of Tanks is available now on PC, Xbox One, PS4, and mobile platforms. Presumably, ray tracing will only be available on PC.