A latest report by Gartner shows the overall growth of 8% in Q4 2009 as compared to Q4 2008 with Nokia leading the market with 36.4% market share. Apple however did not do that bad as well which indicates that there is still juice available in the iPhone. The overall mobile sales remained flat throughout the year with not much of growth despite new phones being introduced for users. 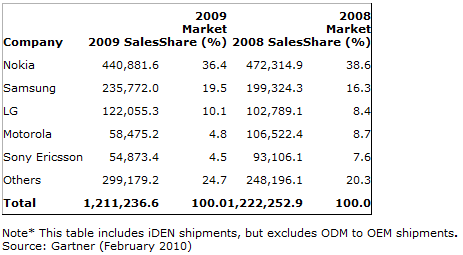 The mobile market did not see a very high growth rate compared to previous years but a gradual recovery of global economy has given a positive trend to the mobile industry. Symbian leads the OS market with 46.9% market share and is being closely followed by RIM with 19.9% market share. Apple however grew significantly to 14.4% as compared to 8.2% market share in 2008. 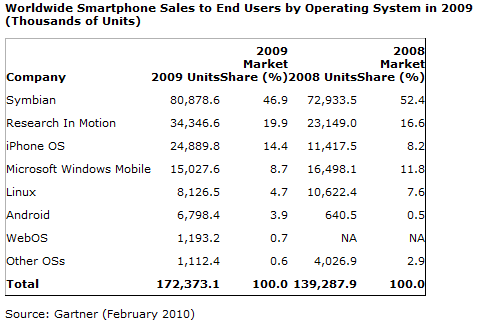 In the over all picture, Microsoft has lost grounds on the OS market with losing over 3% market share and landing on 8.7% in 2009 as compared to 11.8% in 2008. Android was the biggest gainer in the OS market which climbed from 0.5% to 3.9% market share, giving a significant confidence to Google and allied manufacturers.

Thanks to @gripusa from twitter for sharing the report