The Witcher 3: Wild Hunt – Special of the Day

Just like every day, we bring you a brand new screenshot for The Witcher 3: Wild Hunt. The image has been revealed by CD Projekt RED. 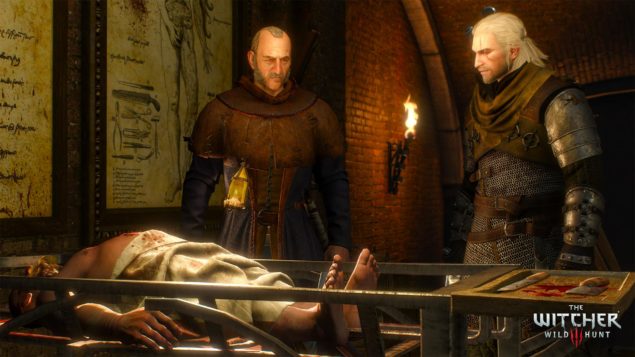 Below is some information on a few of the creatures you will come across in The Witcher 3: Wild Hunt.

Humans have long been fascinated by the wildwood—living in its vicinity was the source of tales about creatures ferocious and benign, friendly and hostile. As they started to settle deeper and deeper into the forests, respect for the unknown diminished. Lumber was gathered, stone abodes were built. As the pestilence that was humanity grew bigger, so did the forest’s and its inhabitants’ wrath.At the heart of the forest lies a secret. In a place born of darkness and primeval nature, resides a mighty and terrifying guardian. Immune to human steel, it is believed theLeshen is nature’s way of protecting the forest and the animals that live within it from the threat humans started to pose upon their ravaging expansion deeper into the lands.Along with the animals it commands, the Leshen became a force to be reckoned with. Sometimes worshipped, this creature can heal other woodland animals and summon nekkers or crows to protect the forest. Its attacks are slow, but deadly—be cautious not to get shackled by its underground roots.

The griffin looks like a combination of a ferocious cat and a giant bird. It usually inhabits primeval highlands and builds its nests on unreachable mountain summits. The griffin preys on large mammals and, being a highly territorial creature, fiercely defends its hunting grounds. When the first colonists appeared and trade routes expanded, griffins were known to attack settlers and merchants in defense of their territory. Griffins are tough opponents and their strength should not be underestimated. Obstinate and aggressive, they make deadly use of their ability to fly during combat, swooping down on their enemies, knocking them to the ground and ripping them to shreds with their claws and beak.

Foglets can appear wherever thick fog arises: swamplands, mountain passes or the shores of rivers and lakes. If no fog is forthcoming, they can create or summon it themselves. By manipulating fog they can separate travelers from each other, hide trails and deafen noise. Like ghastly glowworms, their bodies emit a pale light they use to lure those lost in the fog towards the ravines, swamps or caves in which they make their lairs. When fighting foglets, a witcher must remain calm and keep his wits about him no matter what. Since foglets can take on immaterial form, a slight shimmer of air or a rustle in the grass might be the only clues a witcher has to their location. Casting the AARD Sign at these beings will cause them to become tangible, giving purchase to blades and other weapons.

Neither animal, nor man, the Werewolf takes the worst from both species: the bloodlust and primal nature of a wolf, and the ruthlessness and cruelty of a human. One becomes a Werewolf as a result of a curse thrown by a witch -- the change itself is uncontrollable and unwilling. A man who transforms back to his human form can’t usually remember the atrocious acts committed as a werewolf.

Werewolves are creatures of the night and they are especially active during the full moon. They usually go hunting alone, as there rarely is an opponent that can match their strength, agility and fast health regeneration. If a Werewolf actually encounters an enemy that has equivalent strength and can fight a fair fight, the creature can call for wolven reinforcements that will come to its aid. A good way of dealing with werewolves is a sword covered with oil to combat cursed creatures, or a Silver Bomb that will temporarily block the creature’s regenerative power.

The Witcher 3: Wild Hunt, will release on May 19,2015 for the PlayStation 4, Xbox One and PC. We will continue to bring you any new information on the game as soon as it becomes available. Be sure to check out our previous coverage, here and here for more information on Witcher 3.