The first performance benchmarks of Intel's next generation Skylake, Core i7-6700K have been leaked against the Devil's Canyon based Core i7-4790K by TechBang. The results which compare the performance of the Core i7-6700K 14 nm processor versus the 22nm Core i7-4790K were tested on their specific platforms which include the Z170 for Skylake and Z97 for Devil's Canyon.

The Intel Core i7-6700K is the flagship 14nm processor of the Skylake-S desktop lineup. Its in fact the first of the two processors which will be launched on 5th August by Intel at Gamescom to kickstart the Skylake lineup and the Z170 chipset based motherboards. Starting off with the flagship Core i7-6700K CPU, we are looking at a quad core design with eight threads which shows a multi-threaded design. The chip features 8 MB of L3 cache and has clock speeds maintained at 4.0 GHz base and 4.2 GHz boost clock. The chip can support DDR4 2133 MHz memory and DDR3L 1600 MHz memory. The processor features the GT2 graphics chip with 24 execution units, clock speeds of 350 MHz base an 1150 MHz boost and full support for DirectX 12 API.

The Skylake processors will have several features that include increase IA and graphics performance at much lower power than their predecessors. While the TDP remains 95W, Intel has further improved the efficiency of these new chips hence delivering much better performance. The Skylake processors will support both DDR3L and DDR4 memory types. The DDR3L memory will be available on the mini-PC designs such as All-in-ones and NUCs while traditional PCs which will get Z170 and H170 series motherboards will have native support for DDR4 DIMMs. The unlocked processors options which are also the Enthusiast CPUs as detailed above will allow enhanced full range BCLK overclocking. Hopefully, Intel will use better TIM or Soldering to prevent any heating issues on the dense 14nm chips. Other features includes Turbo Boost 2.0, Hyper Threading, DMI 3.0, 3 digital displays capability (including embedded Display Ports), HEVC, VP8, VVP9, AMCs and support for the latest APIs such as DirectX 12, OpenGL 4.3/4.4 and OpenCL 2.0.

The processor was compared against the Core i7-4790K which is the flagship Devil's Canyon processor with a quad core and multi-threaded design. The Core i7-4790K was Intel's first Haswell based 4 GHz processor plus a boost speed of 4.4 GHz (across all cores) and features 8 MB L3 cache. The processor has a TDP of 88W. Core i7-4790K was tested on an MSI Z97 Gaming motherboard while the Core i7-6700K was tested on a soon to launch, ECS Z170 Claymore motherboard. The motherboard features the LGA 1151 socket that is powered by a 8-Pin connector. A 12 phase power design is cooled off by two set of heat sinks that incorporate heatpipe cooling. Four DDR4 DIMM slots offer support for 64 GB memory capacity with speeds of 3300 MHz (O.C+). Expansion slots include five PCI-e 3.0 x16 slots and a single M.2 NGFF port. Storage options include 6 SATA III 6 GB/s ports and a single SATA Express port. A single USB 3.0 and USB 2.0 internal headers can be found while I/O includes PS/2 ports, HDMI, Display port, 4 USB 2.0, 4 USB 3.0 ports, a Gigibit LAN port and a 6 Channel audio jack.

The performance results can be seen below, do note that the Sisoft Sandra scores represent Core i7-6700K in blue and the Core i7-4790K in red. The performance results show significant gains over Core i7-4790K which is one of the fastest processor available in the market today. The Core i7-6700K scores around the same as a stock Core i7-5820K which is impressive since the latter is a 6 core beast in the Haswell-E lineup. Price wise, the processor is going to stick to the reference MSRP of unlocked flagships around $329-$339 US. The results are preliminary at the moment since proper BIOS and driver updates are yet to roll out for the CPU and iGPU. 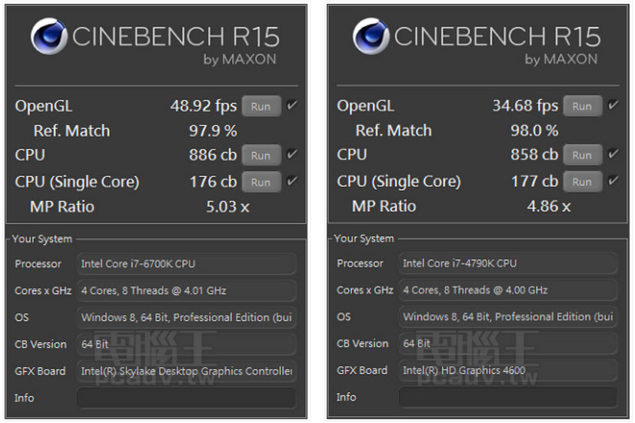