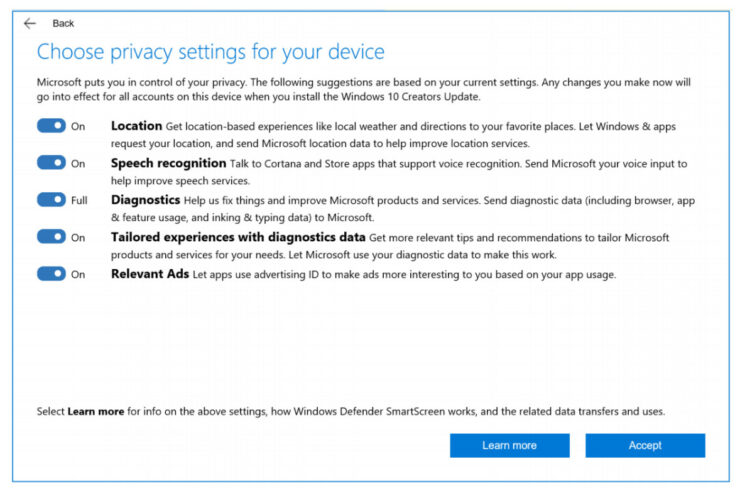 So after Apple apologized to its users out of nowhere, Microsoft is out now to give us a few more shocks. The company is "finally" telling us how much data it's collecting with its highly popular and equally controversial Windows 10 operating system. What's happening to everyone this year? No clues, but it's all in favor of the end user. In a blog post today, the company detailed what data users should expect the company to collect when they use Windows 10 Creators Update.

"For the first time, we have published a complete list of the diagnostic data collected at the Basic level," Windows chief Terry Myerson explained in a blog post. "We are also providing a detailed summary of the data we collect from users at both Basic and Full levels of diagnostics."

While Microsoft has repeatedly claimed that Windows 10 doesn't violate user privacy, we had to take its word because the company never shared exactly what diagnostic data it was collecting. Today, the company has shared details of both the data collected at the Basic and Full level. While we already (kinda) knew what to expect when you go Full (default settings), the summary published today shows the entire summary of collected data, which is a little concerning.

As previously reported, the Redmond software maker is also introducing better data collection controls to allow users to switch between basic and full levels and learn about what data is being sent to the company. "Our teams have also worked diligently since the Anniversary Update to re-assess what data is strictly necessary at the Basic level to keep Windows 10 devices up to date and secure," Myerson wrote. "As a result, we have reduced the number of events collected and reduced, by about half, the volume of data we collect at the Basic level."

The TechNet summary detailed the data collection at Basic level, which is information that Microsoft considers "critical for understanding the device and its configuration including: basic device information, quality-related information, app compatibility, and Windows Store."

The Basic level helps to identify problems that can occur on a particular device hardware or software configuration. For example, it can help determine if crashes are more frequent on devices with a specific amount of memory or that are running a particular driver version. This helps Microsoft fix operating system or app problems.

The Full level includes all the information that Microsoft collects with Basic level, and more. This additional  data includes device connectivity and configuration data, content consumption, Inking typing, and browser, search and query data, among others. To give you a glimpse, here is what Microsoft collects about web browsing, search and query activity in the "Microsoft browsers and Cortana, and local file searches on the device."

Browser Data - Information about Address bar and search box performance on the device such as:

On-Device Search - Information about local search activity on the device such as:

Coming to the Content Consumption Data, this section appears to be collecting more than it should, including things like the language of a book you are reading. Here's a screenshot taken from the summary. 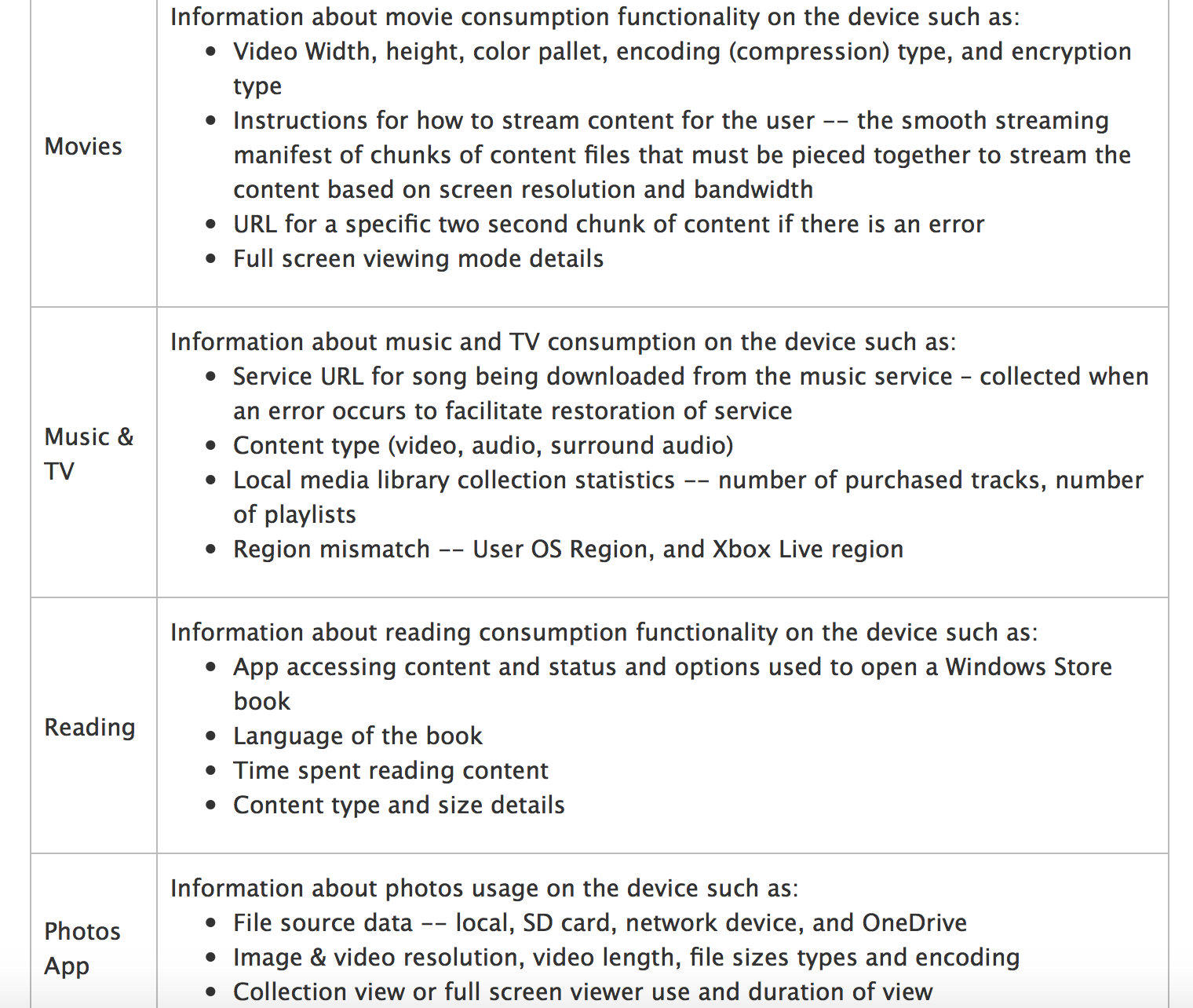 Microsoft has come a long way since the early days of Windows 10 release when the company wouldn't even bother to respond to even the most critical of reports, such as forced update installations and telemetry stories. Whether it's the growing number of lawsuits or the troubles it is facing in Europe, the Windows maker is definitely trying to do better, and more importantly become more transparent about its Windows 10 data collection and privacy controls.

"We will also share more information about how we will ensure Windows 10 is compliant with the European Union’s General Data Protection Regulation," Marisa Rogers, Microsoft’s Windows and devices privacy officer said.

It will be interesting to see if these latest details and improved privacy controls that Microsoft is launching with Windows 10 Creators Update are going to ease concerns among the privacy-conscious crowd, including foreign governments. Users who don't want Microsoft to collect their browsing or file data can opt out of Full (tailored experiences) and toggle it back to Basic level.

- For those interested, details about Basic level data collection can be found here; summary of Full level Windows 10 data collection (version 1703) is also available at TechNet.