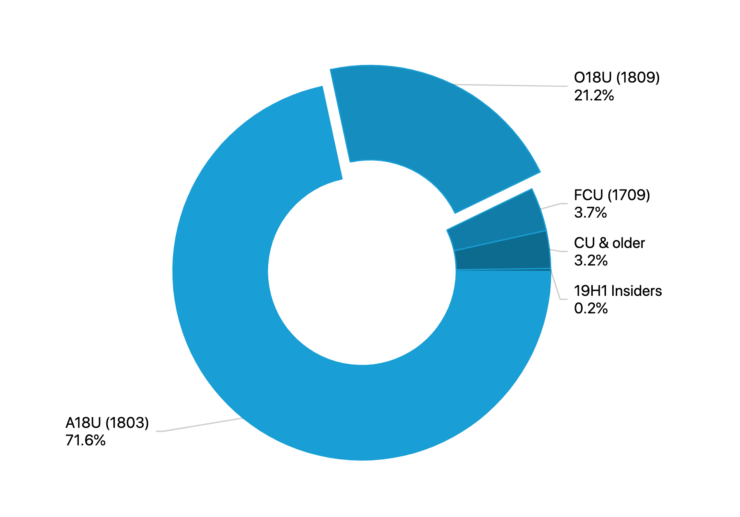 We have been talking about Windows 10 October 2018 Update for nearly a year now. From its exciting preview builds to its launch date to the codename and its final public release - there has been a lot of drama surrounding this particular Windows 10 version. The update was officially released in October last year but became the first Windows 10 version to be pulled back due to data loss issues. Microsoft re-released it after a few weeks, however, version 1809 couldn't manage to earn back user trust.

It appears things might finally be changing - a little. The latest report from AdDuplex shows that the October 2018 Update has hit 21 percent usage rate, which is a significant bump from last month's 12.4 percent usage share. "This number is almost double of what we’ve seen last month, but it’s still far away from the dominating April 2018 Update,” the report says.

Windows 10 O18U unlikely to lead the market before next release

"With only a few months to go until the next Windows 10 update is supposed to go mainstream, it is unclear if some PCs may have to install two major updates within a short period of time or go straight from A18U to 19H1," the AdDuplex report notes. But the next update is just a few weeks away, not few months, which makes things even worse for Windows 10 O18U.

Beating April 2018 Update may just be impossible for version 1809 since version 1803 was the fastest growing Windows 10 version ever released. Since we are waiting for the April 2019 Update to arrive in over a few weeks, it is unlikely if October 2018 Update will manage to gain any significant share of the market as many users would simply choose to wait for the next update.

As can be seen in the above chart, Windows 10 O18U is almost the slowest version ever when compared to previous releases. Compare it with the initial peak experienced by A18U and you can see why we don't believe if version 1809 will manage to surpass the numbers of the April 2018 Update.

- Don’t Want Microsoft to Reserve 7GB for Windows Updates? Here’s How to Disable It