Two years ago in June 2019, DisplayPort 2.0 was officially announced to be the new standard for displays that utilize HDMI 2.1. Due to the pandemic, it has yet to be released. Are we about to see DisplayPort 2.0 launch at either the end of this year or during 2022?

VESA, or Video Electronics Standard Association, is an organization that gives the reference point for DisplayPort technology as well as publishes any specifications for the technology. With their information, it is in the manufacturer's hands as to whether they adopt the new DisplayPort 2.0 or not. Because of the last few years and the lack of in-person conferences, meetings, etc., it has been difficult to discuss any issues that have arisen with the technology.

VESA has been unable to conduct PlugTests, which allows for assistance for companies to become ready for the release of DisplayPort 2.0. PlugTests will also allow for any issues to be discovered and eliminated.

The Video Electronics Standards Association (VESA®) today announced that it has released version 2.0 of the DisplayPort™ Alternate Mode (“Alt Mode”) standard. DisplayPort Alt Mode 2.0 provides seamless interoperability with the new USB4™ specification published by the USB Implementers Forum (USB-IF), and fully enables all of the features in the latest version of the DisplayPort standard (version 2.0) through the USB Type-C® (USB-C) connector. With DisplayPort Alt Mode, the USB-C connector can transmit up to 80 Gigabits per second (Gbps) of DisplayPort video data utilizing all four high-speed lanes in the cable, or up to 40 Gbps with simultaneous SuperSpeed USB data delivery. VESA anticipates first products incorporating DisplayPort Alt Mode 2.0 to appear on the market in 2021.

DisplayPort 2.0 lengthens support for Ultra High Bit Rates, allowing for as high as 20 gigabits per second per lane. That is three times more than the output for DisplayPort 1.4a. The data rate is bumped up to almost 80 gigabits per second of total rates. DisplayPort 2.0 is able to support a 10K display using uncompressed streams at 60 hertz, or two 4K resolution displays that peak at 14 hertz. Display Stream Compression, or DSC, allows for higher resolutions to be supported. 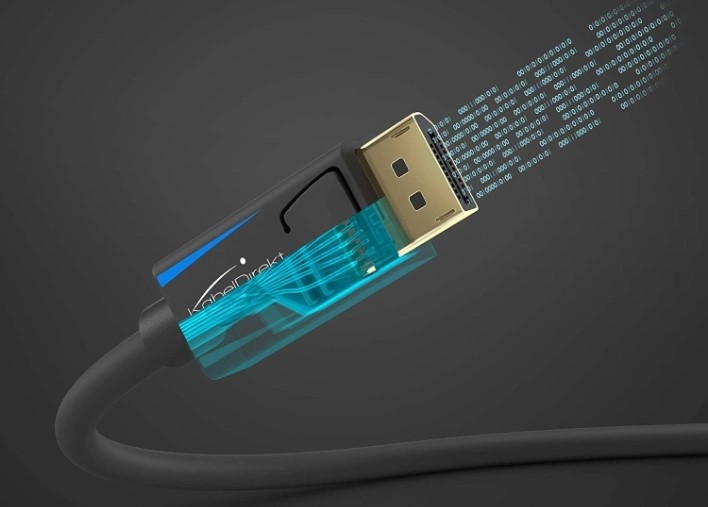 AMD recently delivered patches for the AMD graphics card drivers to futureproof newer generations of AMD Radeon graphics processor units. Since there are no specifics that are being supported by the new patch, especially when talking about GPU architecture, we can only assume that the newest patches help with RDNA3 series. This follows along with VESA's timeline, allowing for speculative dates to be happening at the end of this year or sometime during 2022.