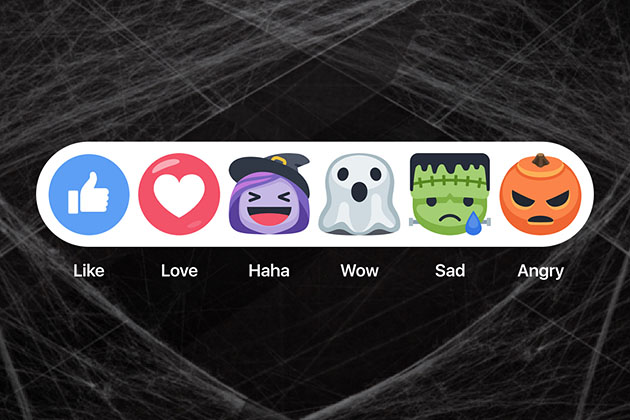 It’s that spooky time of the year again. Everybody’s dressing up, and I mean everybody. The whole world lives on Facebook, so it comes as no surprise that Facebook introduces the adorable emoji reactions which are Halloween customized. It is a seasonal experiment on Facebook’s behalf and it seems quite entertaining.

A pumpkin is now replacing the “angry” reaction, “sad” is taken over by Frankenstein, a witch for the “haha” reaction, and a ghost for the “wow” reaction. These retroactive emoticons now appear in all posts, public and private. But here’s the thing about iconography. It’s a tricky business. And Facebook seems to be caught up in it.

As individuals, we can’t always interpret icons the same way. A sad face and a Frankenstein head will mean two very different things to different people. So when somebody expresses shock in terms of “wow” about an untimely death or a sudden horrific event, and it appears as a ghost? I think the irony might just get one in trouble.

Facebook has been active in playing with the reaction emoticons in tandem with festive occasions and pop culture in the past 6 months. Their first experiment was with the Mother’s Day-themed emoticons like the “thankful” emoticon, following up with emoticons for the 50th anniversary of Star Trek.

Facebook is trying to customize itself on holiday seasons like the Google interface does. As cool as it may seem, Facebook needs to recognize that it deals with a variety of updates and posts and a very different set of responses to those with its likes and emoticon reactions while Google does not. But at the end of the day, it pretty much boils down to the human intellect too. One can simply enjoy the customized emoticons on certain posts and avoid using them on serious topics.