Among the top IM apps, WhatsApp covers more than half of the total market share among Android and iOS users. Today, we have a good news for all the Android users since iOS is not open to third party app sources. Talking about WhatsApp, it not only makes it easier for you to chat but also acts as an exquisite medium to send pictures, videos, music, sound notes starved of a limit. No matter how much you applause WhatsApp, it’s just not enough. However if you think that this IM app lacks something, your guess is absolutely right! It’s Google’s Material Design that still would have been  a great addition. Though the official app developers have still not released an updated UI but we're sure they’re working on it. How does it feel when your lollipop platform runs with most of the other apps with their updated designs and your favorite IM app still goes old school?

We still don’t know when are the official app developers going to launch the new material design for whatsapp but gladly, someone else took care of this trade and yes, he did good. The one to be praised for this effort is Joaquin Cuitiño who had much creativity to put this amazing design in the usual app. His work and experiences are shared on his Google+ Community where you can also find other links, news, discussions and all the changes that he did. 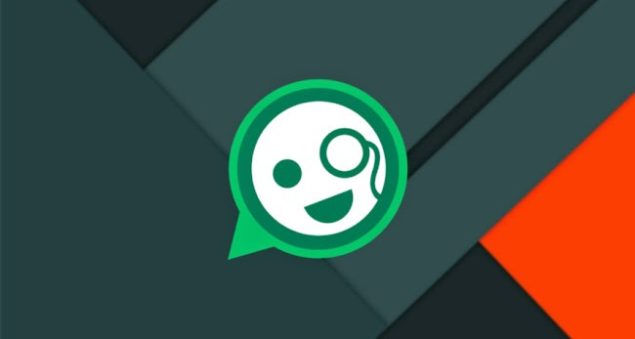 Along with this there are two variants in WhatsAppMD, both of these offer emojis, stock and Google. Now we will have a glance upon all the variations that the traditional whatsapp design went through and made it stunning. 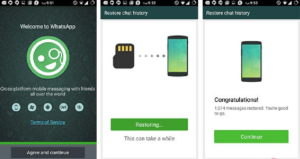 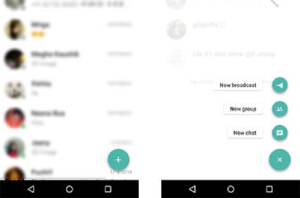 Looking at the screenshots, the first thing that has been altered is the welcome screen. On the welcome screen we can see the WhatsAppMD logo and the complete restoration framework setup. There has been a lot of appeal added to the restoration setup. The design of the UI is better with sleek and has marginal icons. Second comes  the chat icons which have been given a boost because now they seem smoother and pretty much faster than the original.

The compose button has been relocated to the bottom right of the screen which is easy to access seems like a better user interface. Tapping the compose icon would stretch it and options of New Chat, New Broadcast and New Group will be appeared. Moving on, the setting has been updated as well giving a whole new incorporated feel to the icons. You can also update the WhatAppMD app via the Updater along with viewing changelog and updating from within the app. Press the menu button on top right and then press update. 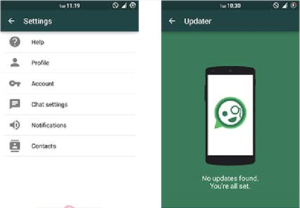 WhatsAppMD is available to download for Android users running Android 4.0.1 or higher. You will also need to enable the unknown sources option from settings since you are not downloading this application from within the Google Play Store. Just go to Settings then Security and check Unknown Sources.

What You Need To Do

After you download the apk file, save it and then go to the file manager to the location where the WhatsAppMD is downloaded to. Tap on it to start and agree on whatever terms and conditions that might show up. After it is installed, go to the app drawer and tap WhatApp. The final thing you need to do is set it as normal and the Material Design WhatApp is all yours to play.

This is all that you need to know about the materialized WhatsApp and do provide us with your feedback, its worthy and helps build a technical better community. Stay tuned for more leaks and rumors coming soon.