WhatsApp is one of the best tools for communicating. Granted, we are too busy sending memes to our friends. But the fact that this messaging app is also one of the best apps for businesses around the world cannot be denied. The app actually has a different version for business as well, especially for those who want to take things to the next level. With that said, the company has now announced that it is bringing a payment system for small businesses in Brazil.

WhatsApp in Brazil is Now Getting Digital Payments, Which Will Allow People to Send Money as well as Make Purchases

According to WhatsApp, Brazil has over 10 million small and micro businesses, with many people simply messaging businesses directly on WhatsApp for their queries. WhatsApp will now allow people to not only send money, but also view the entirety of the store's catalogues. Customers will be able to send payments for the products they want to buy, as well. This in result will make the payments simpler, as well as bringing more businesses into the digital economy of Brazil.

Additionally, WhatsApp will also allow you to send money to your friends and families. Payments on WhatsApp are enabled by Facebook Pay, and in the future, the company aims to allow people to use the same card information for both Facebook and WhatsApp. A great step, considering how WhatsApp is owned by Facebook. 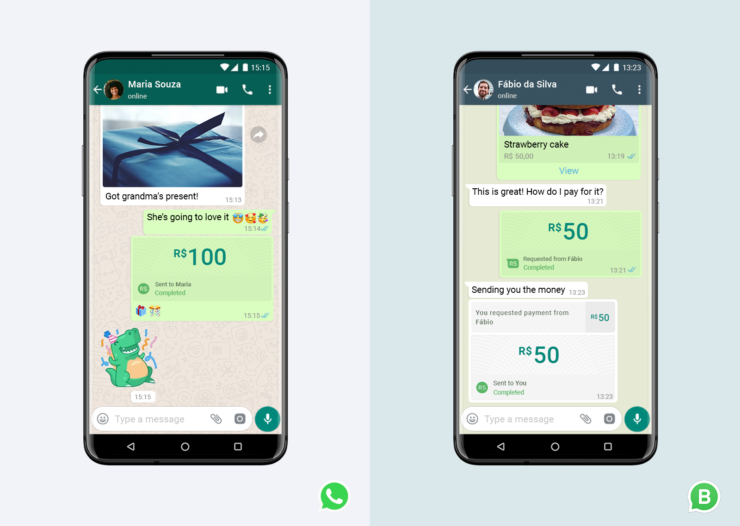 The company further talks about how they have built this payment system with security in mind. You can authenticate payments using a six-digit PIN or your fingerprint scanner. In the starting, WhatsApp is going to support both credit cards as well as debit cards from Banco do Brasil, Nubank, and Sicredi. Both Visa and Mastercard networks are supported and the company is currently working with Cielo, as well. Cielo is the leading payment processing network in Brazil. Last but not the least, WhatsApp is keeping this model open which will allow more partners to join in the future.

This is what WhatsApp had to say on their official blog post.

Sending money or making a purchase on WhatsApp is free for people. Businesses will pay a processing fee to receive customer payments, similar to what they may already pay when accepting a credit card transaction.

Payments on WhatsApp are beginning to roll out to people across Brazil beginning today and we look forward to bringing it to everyone as we go forward.

With over two billion active users, we believe that company's decision to bring payments is a good option. We are waiting to see this feature roll out in other countries, as well.