WhatsApp has become the go-to app for anyone who is looking to communicate. It does not matter who you are talking to, the phrase, "WhatsApp me" has become a lot more common than anything else we are familiar with. For all the right reasons, as well; most of the modern-day devices are connected to the internet all the time, and having SMS plans is not something worth your time, considering how WhatsApp provides you with everything and more.

One of the key features of WhatsApp is audio and video calling feature that is being used widely. Back in 2018, the Facebook-owned WhatsApp brought group video and audio calls as well. However, at that time, these calls were limited to four participants only.

After 2 years, the feature is finally getting an update.

The news should not come as a surprise as a few days ago, we did report that WhatsApp is looking into it. However, at that time, it was not sure just how many participants will be announced. Just like the previous one, the latest report comes from WABetaInfo, and as per the source, the latest beta of the messaging app will see an increase in the participant size. The latest beta version is v2.20.133.

Just as we previously reported, in order to utilize this feature, all the participants should be using the latest beta, or else the call will not take place. You can see the screenshot below. 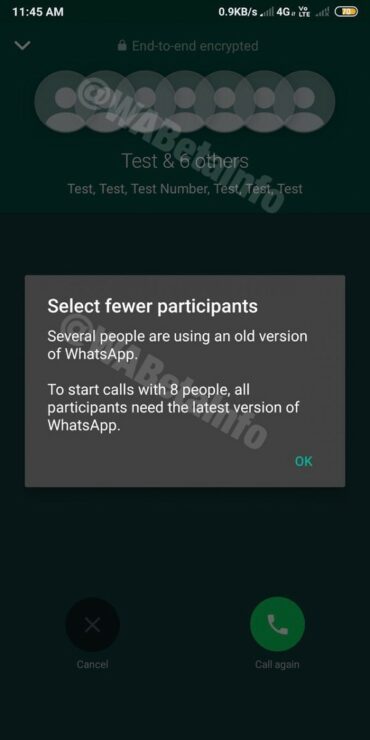 Aside from increasing the participant limit, WhatsApp has also gone ahead and added some minor changes. For starters, the call button in the groups will let you directly call all the members at once as long as there are four participants or less. However, in the case of four or more participants, you will see a list of participants and you will be asked as to who you want to add in the group call.

If you are looking to try out the new feature, you can head over here and sign up for the latest beta. Let us know what you think of WhatsApp's decision of increasing the participant limit.