Microsoft's Xbox One have been suffering with different hardware problems since its launch, many users have reported several problems with their Xbox One consoles. According to Microsoft, the number of defective consoles is very less compared to the number of units sold but the manufacturer has not made a statement regarding the cause of the issues. Different Xbox One hardware problems are being reported as the users are spending more time with their consoles, here is another wired problem reported by some users.

Some Xbox One users are complaining about new and quite weird Xbox One hardware problem on Xbox Support forums. According to the users that are reporting the issue, their Xbox One console started leaking a sticky liquid leaving behind a milky-white residue on the console's case. The oily liquid appeared on the vent of  the main heatsink fan of the console.

CynicalAnarchy, the user suffering from this Xbox One hardware problem, also updated his thread on the forums with two pictures of his defective Xbox One console showing the leaked liquid, below is the statement he issued to SpawnFirst about the problem with his console.

“…I didn’t just take a picture as soon as I saw the residue I waited two weeks then I came here to the forums, to try and find out if I was the only one with the problem, and then today, I posted the pictures and contacted microsoft, like the person up there suggested. I take relative good care for my xbox, I’ve only place my controller or the mic on top of the xbox, I haven’t spilled anything on it and the oily sticky ness you see in the pictures is me trying to wipe it up earlier in the week, hoping the problem went away. I’ve read a few off the comment on the sites saying I’m a fake or a troll cause they don’t see any xbox one games on my recent games, Both AC4 and BF4 are xbox one games, the only ones I have. I can assure you this is not fake, I don’t have an actual camera, but I’ll see what I can do about getting a better picture.” 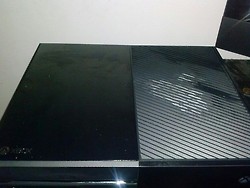 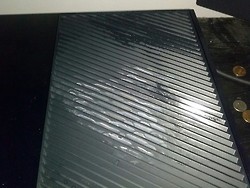 The white residue could be seen clearly on the vent of main exhaust fan of Xbox One in the pictures. For now, the supposition is that the leaking liquid is probably the thermal compound that was applied between the GPU/CPU and heatsink of the Xbox One console at the time of manufacturing of console to control the heat level. The liquid showed up on the vent of main heatsink fan at the right-front of the console so it could be the thermal compund that turned into a sticky liquid after heating up.

So far only two users have reported this unusual Xbox One hardware problem and none of them have no idea about the cause of leaking liquid. Xbox Support is obviously already aware of the issue but there is no official statement made up until now.