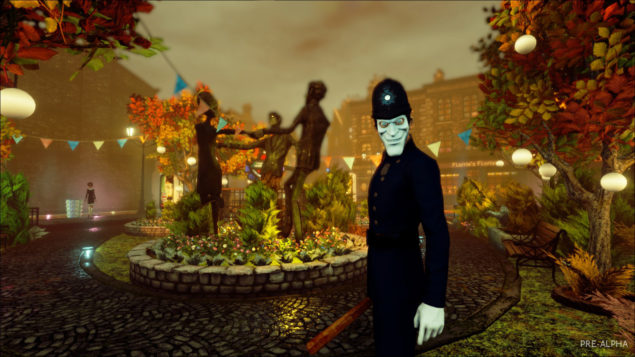 We Happy Few is an UE4 powered first person survival game set in a dystopian alternate version of England, 1964. Developed by Canadian studio Compulsion Games (mainly known for Contrast), it was successfully Kick-started in July 2015 for $335K.

The game is set in the fictional city of Wellington Wells, which is going to be procedurally generated in order to provide a completely new environment each time the players fail or succeed. Their task will be to blend in as a Downer, that is to say someone who explicitly refrains from taking Joy, the drug which keeps the entire population under control in Wellington Wells; the ultimate goal being the escape from the city itself, of course.

We Happy Few is currently scheduled for release on PC and Xbox One, though this recent tweet does shed some hope for PlayStation 4 users: while the developer is focused on these platforms right now, it also said "never say never" hinting that there's a chance. Then again, it would be hard not to be interested in the huge PlayStation 4 market with its over 36 million units sold.

@browneagle44 At the moment no, we are focusing on Xbox and PC, but never say never!

Just a few hours ago, Compulsion Games confirmed that the Early Access version of We Happy Few (including Game Preview for Xbox One) will be available in Mid-2016 while the full release date is not decided yet.

@dogfish1286 Early access will be mid year, as for the full release, nothing announced yet

If you're going to PAX East (Boston, April 22-24), you'll be able to play the game as the developer confirmed its attendance.