The pitch for Watch Dogs: Legion sounds too good to be true. You can recruit and play as every NPC in the game? Come on now. Surely, only select characters will be playable? Or perhaps only a handful will actually be useful? At the very least, you probably have to return to using specific characters for core story missions, right? Nope! I had a chance to play around 45 minutes of Watch Dogs: Legion at E3 2019, and it seems Ubisoft is fully delivering on their promise. You really can make any random person you pass on the street the hero of your story, and personally, I can’t wait to get recruiting. 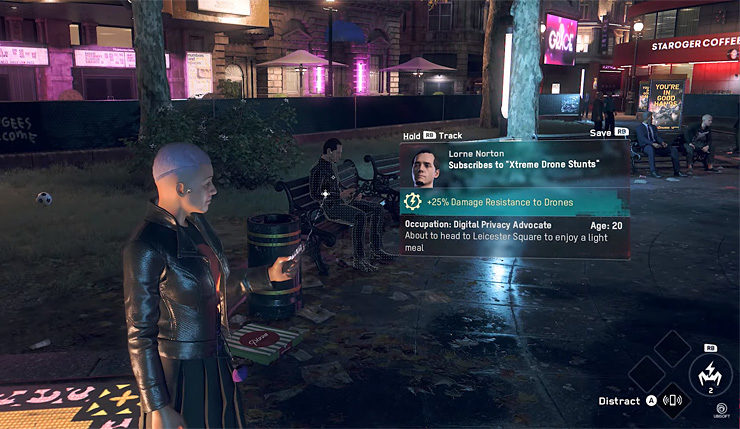 For those who missed the game’s unveiling, Watch Dogs: Legion relocates the action and intrigue to a post-Brexit near-future London, where society has been turned upside down as automation, drones, and AI replace human jobs, and a failing government focuses on scapegoating immigrants rather than dealing with the crime and social issues that have grown beyond their control. So, yes, it’s another totally not political at all Ubisoft game. The DedSec hacker collective from Watch Dogs 1 and 2 has graduated to full-on resistance movement, and it’s up to you to enlist soldiers to take down Albion, the main corporate force responsible for Britain’s sorry state.

Recruitment is a satisfyingly frictionless process – you can scan anybody you pass with a simple press of the right trigger, bringing up their name, occupation, and unique perks. Anybody who strikes your fancy can then be quickly bookmarked so you can peruse their full demographic and background details at your leisure. Actually turning somebody into a playable character can take a bit of work as everybody has their own opinion of DedSec. Some are ready to sign up on the spot, others are more wary, and will only be ready to join once you’ve done a few favors for them. Once you’ve got your prospective team member in the right mood, you will complete one final unique recruitment mission for them, at which point, they’re yours to control. And again, these are full-fledged protagonists – they appear in the game’s cutscenes, during which they’ll respond in unique ways. Developer Ubisoft Toronto have gone above and beyond here, as every character is voice acted and dozens of variations have been written for every cutscene. 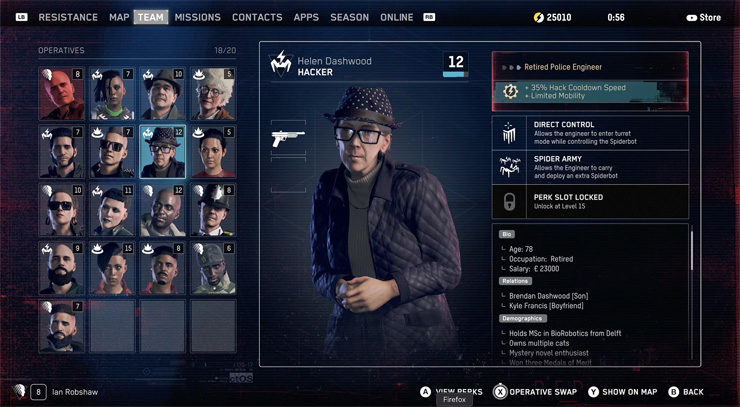 I only had the chance to draft a single character during my Watch Dogs: Legion demo, opting for Orpha Kipling, a dowdy (and perhaps slightly lonely) waitress who was a hammer throw champion in a past life. After erasing some data from a local police server for her, she agreed to join the revolution and got to work sneaking around and pummeling bad guys in her saggy gray cardigan.

I choose to make Ms. Kipling an Infiltrator, but I could have just as easily make her a Hacker or Enforcer. While most characters have perks that push them towards one of the game’s three classes – my waitress’ hammer-tossing prowess granted her a melee combat bonus, making her a natural for the stealth-and-fighting-focused Infiltrator – you’re free to play against type. Make that doddering granny a gunplay-focused Enforcer if you want. Go crazy! Beyond the base class, each character also comes with three perk slots, which you can mix-and-match in order to create your own unique build. By the end of my demo I was already quite attached to my jaw-breaking waitress. The fact that such a seemingly inconsequential character would not only attract my attention, but actually be fun to play as, speaks volumes about how well Watch Dogs: Legion’s “recruit anybody” mechanic has been implemented. 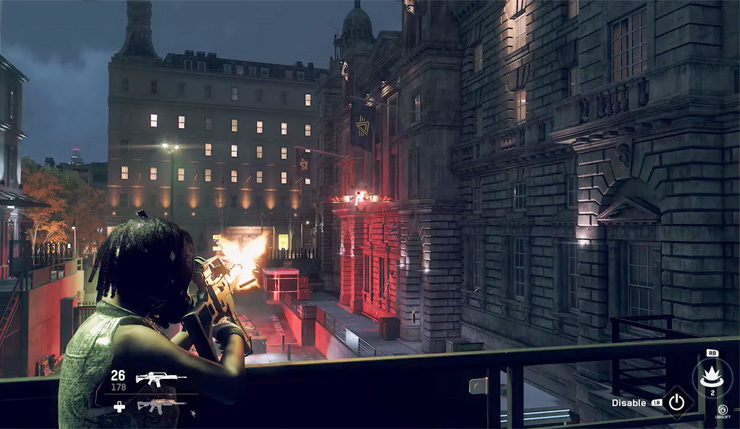 Of course, recruiting a character is just the beginning of your mission. How does Watch Dogs: Legion play once you take them out into the field? A lot like Watch Dogs 2, which isn’t a knock, by any means. The game certainly looks fairly nice, with each of the game’s neighborhoods sporting a unique feel – the Westminster area is stately and still fairly well kept up, while Camden is gritty, grimy, and overrun with hipsters. Gameplay is a mix of light parkour, stealth, combat, and, of course, plenty of hacking of doors, drones, cars, security cameras, and other helpful things connected to the network. Hackers have access to the returning spider drone, which can skitter around out of sight, remote hack, and even take down enemies with a creepy facehugger-style takedown. Meanwhile, Infiltrators get handy AR camo, and Enforcers get deadly sticky mines. It feels like melee combat has been tightened up a bit, as Ubisoft wants to emphasize and encourage the non-lethal playstyle this time around.

Ultimately, outside of recruitment, the main thing Watch Dogs: Legion updates is death. Now when enemies get the best of you, you have the option or surrendering to authorities, which will make the character you’re playing as inaccessible until you break them out of prison. Alternatively, you can choose to continue to resist, and if you’re taken down after that, your current character is finished. Permadeath ought to add an interesting dimension to the Ubisoft open world formula, which has become increasingly consequence-free over the years. 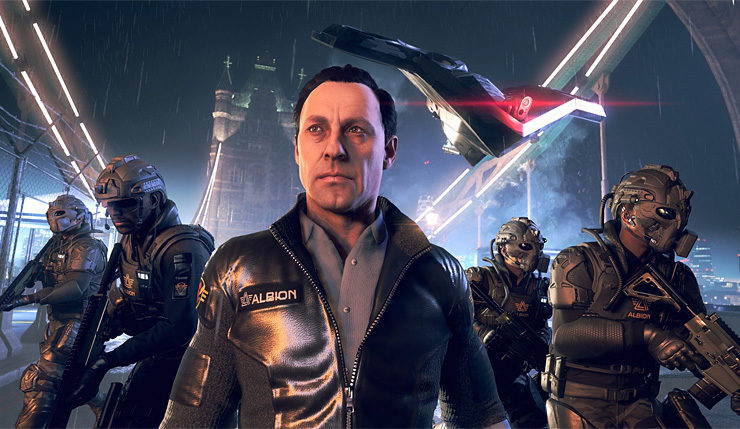 In terms of scope, it sounds like Watch Dogs: Legion will offer a more abbreviated campaign than previous entries in the series, with the game’s lead designer Liz England promising me five main multi-part story missions. That’s not too surprising, considering how much variation Ubisoft is building into Legion. Clearly this is a game meant to be replayed and tinkered with at your own pace – beelining directly to the end of Ubisoft’s virtual friend-making simulator would be kind of missing the point. No point in saving England if you can’t be popular while doing it.

I’ll admit, I haven’t always been a huge fan of Ubisoft’s open world games. Their sandboxes are technically impressive, no doubt, but all too often they’re lacking in personality. The publisher has been toying with adding more RPG-like depth to their games for a while now, and Watch Dogs: Legion promises to be their most successful effort yet on that front. They’ve really gone the extra mile with the new “recruit anyone” mechanic, and I found myself immediately drawn in by their virtual London populated by real, living, playable characters. Add some new refinements to Watch Dogs’ core hacking and action gameplay to the mix, and you have a game that could be more than just another Ubisoft sequel. This might be the next open-world watershed for the company. Keep Watch Dogs: Legion on your radar, because after only 45 minutes with the game, I definitely feel London calling.