A little late weekend news for you all (I've been at EGX checking out games), but something you should certainly know. The Crytek developed Warface, published by My.com, is now available on the PlayStation 4.

Four months ago we covered the fact that the title was coming to consoles. As expected from the F2P FPS title, it is completely free to download, letting you jump into a host of co-op raids with your friends on the console, fighting hulking monstrosities, the undead and more as you attempt to take down the Blackwood faction.

Naturally, being an FPS, the game has a PVP mode for you to test yourself against other people. It will feature six modes across nineteen maps. The game is quick to highlight that success in both PVE and PVP modes requires teamwork and a balance of soldier classes within your team.

Playing Warface, you will choose from one of four classes to use, each with their own unique loadouts, skills and abilities. These classes are Rifleman, Sniper, Medic and Engineer. Naturally, you will have the ability to choose between and modify loadouts. The game will also feature a host of post-launch content, with plans reaching towards 2019. Four DLC's are currently in the works for the game, which will add completely new raids, game modes - including a battle royale mode - and forty new maps. 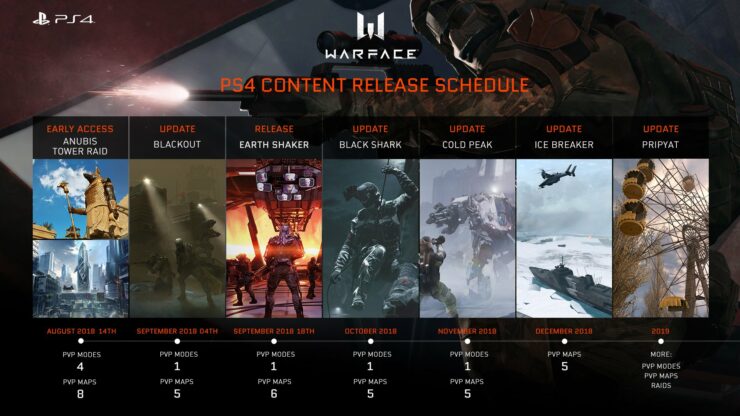 Warface also features five starter packs at launch, giving you a boost against any opposition. These take the form of four packs, each representing one of the four classes. There is also a pack that gives you the four combined packs at one single price.

The Xbox One version of Warface is currently planned to be released and is currently in open beta. It's likely that the full release will come next month, should the title match the PlayStation 4 schedule in time between stages.