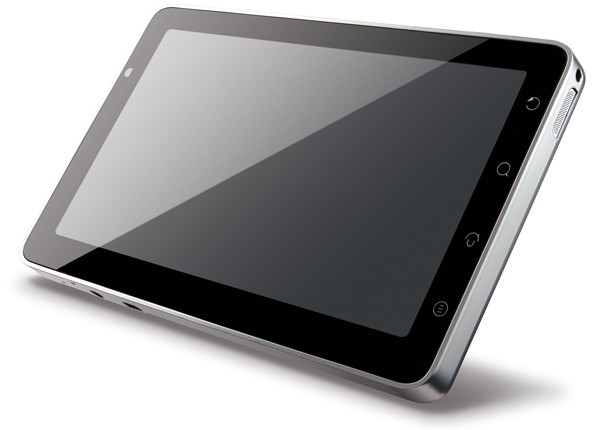 ViewSonic has revealed the world's first 7" tablet called the ViewPad 7. The device has a multi-touch screen and is powered by Google's Android OS. For a device priced around 350 pounds, the ViewPad 7 has many interesting features including a 7" multi-touch display, front and rear cameras, microSD slot for upto 32GB of memory, Wifi and 3G capability, USB connectivity and a SIM slot which also adds cellular capabilities to the tablet. Other features include a built in e-book reader, GPS and G sensor for properly orientation of the device when in use.

We are proud to announce another world first at Viewsonic. 3G phone functionality combined with dual cameras gives the ability for use of Android apps to use augmented reality or video calling on the move with the benefit of an excellent 7" screen" says Derek Wright, European Product Marketing Manager. "The ViewPad 7 is aimed at users who require the 'always on' connectivity they are used to from a mobile phone with a more agreeable screen size for longer term use.

At an expected price of $540 (350 pounds) the device is priced close to the Apple iPad 32GB. Both devices have their ups and downs but overall the ViewPad is as feature rich as the iPad and even excels at some aspects such as a built in camera and cellular capabilities. The device is already shaping up to be a strong contender in the Tablet PC market and more will details will be revealed at IFA 2010 when ViewSonic officially shows the device to the public.