It would be a moot point to say that Video Games are big business. We all know they are. Just how big they are, though, could come as a surprise to some. At least this may be the case in the UK where Video Games sales are now worth more than Music and Video sales combined.

Today, the Entertainment Retailers Association (ERA) have published their preliminary findings from 2018 and these show that the UK entertainment market is worth around £7.53bn, with Video Games bringing in £3.86bn. This beats both Music and Video combined, which brought in £1.34bn and £2.33bn respectively. 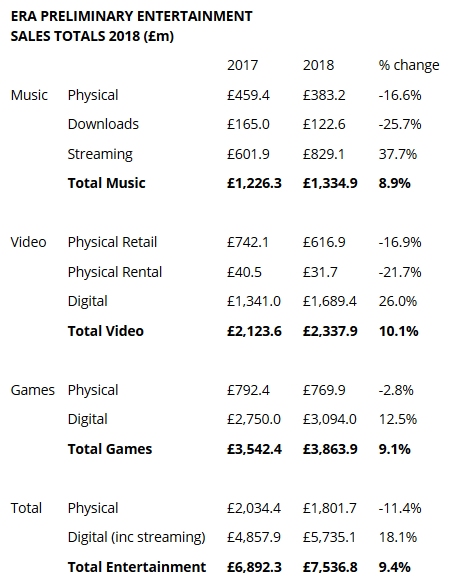 The ERA had this to say about games over the previous year:

The biggest winner in entertainment’s digital transformation has been the games sector. For the first time in 2018, ERA can report that games accounted for more than half of the entire UK entertainment market (51.3%). More than any other sector, games has benefitted from a proliferation of new services from direct to console downloads to mobile and social gaming.

Over the previous years, we've covered at length about the demise of physical sales. Demise may be a strong word for now, but they are certainly faltering across the board - only truly delivering for major releases across all three categories.

A brief look at Music and Video will show that in Video, physical sales still make up over two-thirds of an average top-selling title. This is understandable as even for myself, a subscriber of Netflix and Amazon Prime, I still love my blu-ray collection for certain titles and, primarily, TV series. Music shows a much more varied landscape, with some albums selling over two-thirds digital, with others being over two-thirds physical. The best album, The Greatest Showman, was almost a 50/50 split, with physical sales only slightly winning.

In Video Games, huge retail sales of certain titles were still noted. FIFA 19 was the biggest selling physical game of the year, selling just short of 1.9 million units. Red Dead Redemption 2 came a close second with 1.75m units and Call of Duty: Black Ops 4 was the only other title to break 1 million units sold, at 1.17m. The full list of the top 20 selling physical titles of the UK can be seen below, with the surprise inclusion of the five-year-old Grand Theft Auto V, still selling over 300,000 physical units.

Still, the trend towards digital is undeniable. Of the £7.53bn in sales this year across all three categories, £5.73bn have been digital. This is roughly 76%. Video games show the largest disparity, with digital making up 80%, compared to Music at 71% and Video at 62%. The effect on the UK retail market has been profound, to say the least. We've documented the trials and tribulations of Game Digital (LON:GME) and UK retail stores quite a bit in the past.

It's a trend that likely won't see an end, with more casualties to come. Recently, Music, Video and Games retailer HMV filed a notice last month that they intend to appoint administrators, only five years after it was in administration in 2013. Game Digital also announced its intention to list on AIM, rather than being listed on the main market. Only time will tell to see if the retailer can whether the ever moving trend to digital.

The full preliminary report from the ERA can be read here.