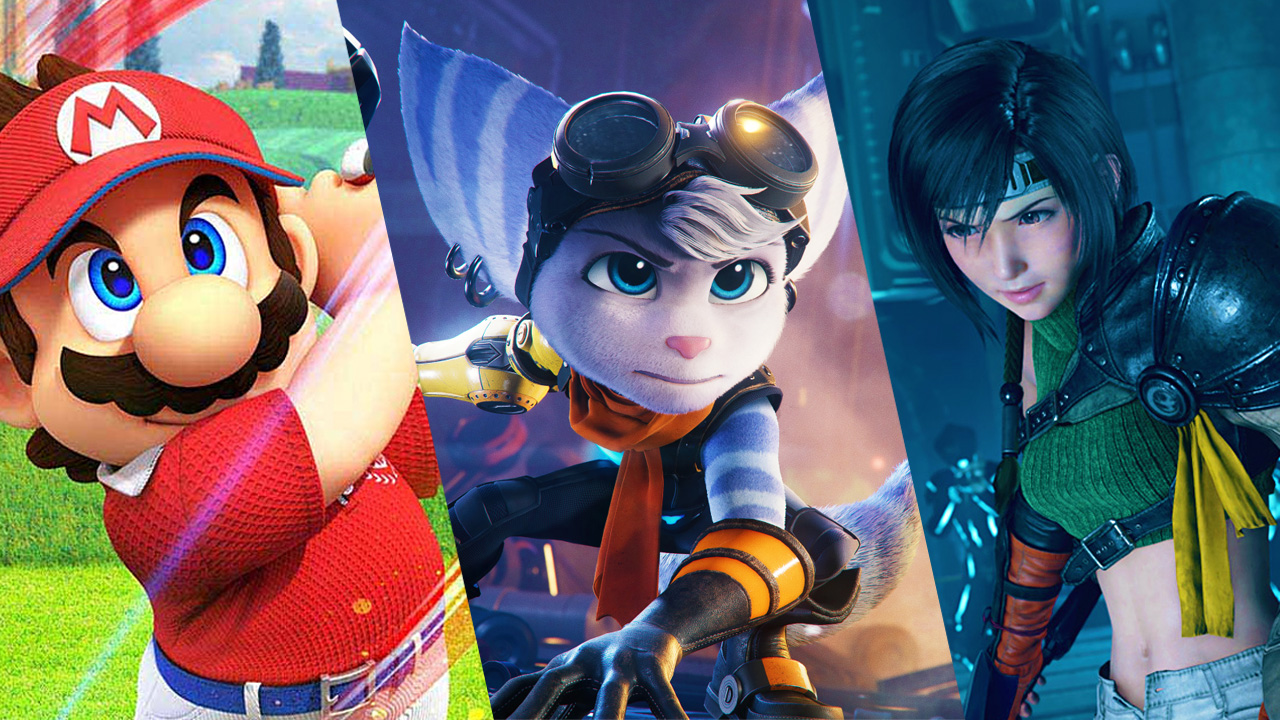 After a hot May, things roll on nicely in June, at least if you’re PS5 owner, with a couple big exclusives in Ratchet & Clank: Rift Apart and Final Fantasy VII Remake Intergrade. In addition to that we also get the surprisingly-promising-looking Mario Golf: Super Rush, freaky action-RPG Scarlet Nexus, and more. On the indie front, you can look forward to the innovative card-based RPG Griftlands and fuzzy noir detective game Backbone, just to name a couple.

That said, here are the games you should be looking out for in June…

Looking to slaughter your friends, but suck at shooters? Then perhaps the Chivalry series is for you! The new multiplayer slash ‘em up Chivalry 2 adds a host of new features to the mix, including larger 64-player battles, faster, more fluid combat, and of course a ton of new content, maps, and more. Reaction to early testing has been solid, so start sharpening your blade now brave sir! Pre-order the game here.

Final Fantasy VII Remake arrives on PS5 this month, but this isn’t just your standard “it’s 4K and 60fps now” next-gen console upgrade – in addition to a full visual spit and polish on the original PS4 game, Square Enix is also serving up a fresh PS5-exclusive chapter featuring fan-favorite character Yuffie and all-new story elements not in the original FF7. Those who already own FF7 Remake on PS4 can upgrade for free, although if you’re new to the game, you can pre-order here.

The PS5 gets its biggest exclusive yet! The all-new Ratchet & Clank: Rift Apart harnesses the PS5’s super-speedy solid-state drive for a cool new rift-hopping gimmick that allows our heroes to bounce around battlefields and even between worlds nearly instantly. Add in some absolutely eye-popping visuals and the spunky new playable female Lombax, Rivet, and you have one of the most exciting entries in Insomniac’s series in some time. Pre-order the game here.

Nintendo’s plumber is hitting the links again with Mario Golf: Super Rush, and he’s bringing some interesting new modes with him. The headliner is Speed Golf, which essentially mixes golf with Mario Kart, but there’s also a full RPG-like Adventure mode, and even a battle-royale-inspired option. Mario sports games have been kind of lacking for a while, but it looks like developer Camelot Software is really putting the effort in with this one. Pre-order the game here.

Get ready to get weird, because Scarlet Nexus, the new action-RPG from Bandai Namco’s Tales team, launches this month. A unique mashup of Devil-May-Cry-style combat, RPG elements, and weird enemy designs seemingly ripped from a Silent Hill game, Scarlet Nexus looks to be the 2021 game to get for those into Japanese oddities. Wccftech’s Francesco De Meo certainly seemed to be into the game in his full hands-on preview. Pre-order the game here.

The latest from Don’t Starve and Mark of the Ninja developer Klei Entertainment, Griftlands has been in Early Access for several months, but launches in full in June. Griftlands is a card-based sci-fi RPG that lets you deal with all enemies either through traditional, violent means, or through negotiation. All characters have their own allegiances and opinions, and playing politics is just an important as mastering spells and attacks. This one ought to be Klei’s deepest game yet. Here’s the Steam page for Griftlands.

Annoying real-life insects are starting to multiply outside, so why not take refuge inside with the tranquil creepy-crawly action-adventure, Stonefly? Explore a beautiful miniature world in a robotic insect, do battle with other many-legged critters, and get to know a cast of memorable characters. Stonefly is the rare case where a game being packed with bugs is actually a good thing. Here’s the Steam page for Stonefly.

Ever find yourself thinking back wistfully to the days of creative, weird LucasArts adventure games like Day of the Tentacle and Sam & Max? Well, Backbone has a concept that feels like it could have sprung directly from the mind of Tim Schafer or Ron Gilbert, as you play as a scruffy raccoon detective in a dystopian Vancouver populated by talking animals. Solve a dark mystery while resisting the urge to reach out and pet all the suspects. Here’s the Steam page for Backbone.

The latest charming project from Greg Lobanov, who previously spearheaded the excellent Wandersong, Chicory is a Zelda-esque adventure that lets players paint literally everything in its black-and-white coloring-book world. It’s a neat concept that sounds like it should be particularly appealing to kids, families, and those who just have an insatiable itch to doodle. Do check out our full interview with Greg Lobanov. Here's the Steam Page for Chicory: A Colorful Tale.