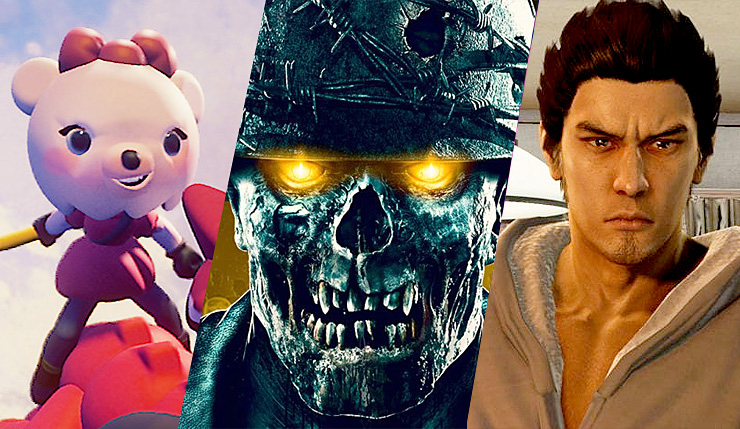 Keeping track of all the latest video games coming out is an increasingly complex task, what with multiple PC storefronts, Xbox One, PS4, Switch, mobile, and more to keep track of, but don’t worry, I’m here to help. I’m kicking off a new monthly rundown of the games you need to be keeping an eye on, from the big triple-A headliners, to the intriguing indies you might otherwise overlook.

2020 has got off a somewhat slow start, but will start to pick up a bit in February, with the release of the long-in-development PS4-exclusive Dreams, undead splatterfest Zombie Army 4, and the latest Koei Tecmo historical strategy game, Romance of the Three Kingdoms XIV, just to name a few. Meanwhile, on the indie front we have a number of promising titles like Luna: The Shadow Dust and The Suicide of Rachel Foster, as well as some anticipated Switch ports, including Devil May Cry 3 and Metro Redux.

Now, I should note, while I may have played demos or got early access to some of the games I recommend in this article, in most cases I’m simply choosing games that look promising, and can’t vouch for the end product. Do wait for reviews before buying! With that said, here are the games you should be looking out for in February…

Another would-be Left 4 Dead successor takes to the zombie-slaughtering field. From the makers of the Sniper Elite series, Zombie Army 4: Dead War serves up familiar 4-player co-op action, with more of a focus on realistic shooting physics and sniping. Don’t expect any good taste or restraint from this one – this is a game where you pursue Hitler into hell itself and do battle with zombie sharks and tanks (that is to say, a tank actually made of rotting body parts). Expect a full review of Zombie Army 4 early next week. Pre-order from Amazon.

Sega’s re-releasing of all the PS3-era Ryu ga Gotoku games on PS4 concludes with Yakuza 5. Once again take your brawling skills to the streets of Kamurocho as Kazuma Kiryu and four other playable characters, in one of biggest, most complex entries in the series. Of course, the Yakuza  5 remaster includes all the features you’d expect, including refreshed 1080p/60fps visuals, localization updates and tweaks, and the restoration of some content previously cut for Western audiences. Buy on Amazon.

After years in development and nearly a year in Early Access, the full release of Media Molecule’s Dreams is almost here. A 3D game creation tool almost as versatile as real engines like Unity and Unreal, Dreams has already been used to make some pretty incredible stuff. Once the game is fully unleashed the creativity should really start flowing. Media Molecule has said they have a 10-year-plan for Dreams, so this is your chance to get in on the ground floor. Pre-order from Amazon.

A One-Punch Man fighting game seems like the most obvious idea in the world, and next month, it finally happens. One-Punch Man: A Hero Nobody Knows is a 3v3 arena fighter featuring pretty everyone you could possibly name from the anime (there are 25+ fighters in all). Yeah, the game might have some balance issues considering its main character is invincible, but, overall, A Hero Nobody Knows looks pretty solid for a licensed anime game. Pre-order on Amazon.

It’s a Koei Tecmo one-two punch this month – a new Warriors spinoff and the company’s latest historical strategy game, Romance of the Three Kingdoms XIV. Technically, RotTK 14 has been available on Steam since January 15, but the game’s English patch doesn’t arrive until February 28, so I’m treating that as the Western release date. Expect the mind-boggling depth this series has always provided, with over 1000 officers to recruit, as well as new troop management and administration strategies. Pre-order on Amazon.

SEN: Seven Eight Nine came out on mobile platforms last year, but now the game’s coming to PC and Switch for those who want to play the game in a more traditional way. SEN is a laid back puzzle game that provides players with minimal guidance – it’s up to you to figure out the game’s patterns and what it’s asking of you. Looks like good brain-teasing fun. Here’s the Steam page for SEN: Seven Eight Nine.

Survive the Blackout is a survival game set in an all-too-believable post-apocalyptic world. You won’t be facing a deadly disease of hordes of the undead, merely lack of electricity. Manage a small group of survivors and make gut-wrenching decisions as you try to survive the darkened ruins of civilization. This one looks to deliver a good mix of challenge and intelligent writing and themes. Here’s the Steam page for Survive the Blackout.

Luna: The Shadow Dust is a gorgeous, hand-animated point ‘n’ click adventure featuring a wordless story and a clever puzzles that require you to make use of light and shadow and cute little monster buddy. Luna feels similar in tone to games like Machinarium and Samorost from Amanita Design, with perhaps a touch of Studio Ghibli thrown in for good measure, which is definitely a good combo in my book. Here’s the Steam page for Luna: The Shadow Dust.

The Suicide of Rachel Foster is an interesting stew, seemingly combining Gone Home, Firewatch, and generous serving of Stanley Kubrick’s The Shining. The game’s story also sounds unusually dark and mature, as you play as a woman named Nicole who has to confront past sins as she finds herself trapped in her family’s creepy hotel. This one looks like it could be one of the standout narrative adventure games of 2020. Here’s the Steam page for The Suicide of Rachel Foster.

“Cute” is not a word you would usually associate with the Conan franchise, but that’s exactly what Conan Chop Chop is. This cartoony co-op roguelike actually started as an April Fool’s joke, but it was a good enough idea that publisher Funcom went ahead and made the game for real. I had a chance to try this one out at last year’s E3, and can confirm it’s some solid same-couch co-op fun. You can check out the Steam page for Conan Chop Chop here.