The Trump administration said on Friday that the U.S. would impose tariffs on $50 billion of Chinese products, provoking a direct retaliation from Beijing and escalating a what is now definitely a "trade war" between the world’s two largest economies. China even called it as much later in the day during their official press release. Trump has wavered back and forth on imposing new tariffs on Chinese imports.

However this time, much like the Canadian (among others) steel import tariffs, things are for real.

The headline statement from the Trump administration, found here, is that this is a direct response to years of unfair trade practices as well as IP theft that China allowed to blatantly take place.

The 25% tariffs come into effect July 6th and will cover roughly $34 billion worth of imports composed of a list of vetted goods that were announced in April and reviewed in May.

A further $16 billion tariffs are being evaluated which will bring the grand total to $50 billion, at least as it stands for now.

We may delve into this with more detail in the coming weeks as the situation develops but for now its fairly easy to summarize just how disadvantaged the U.S. is when it comes to playing a game of trade war with our largest trading partner. 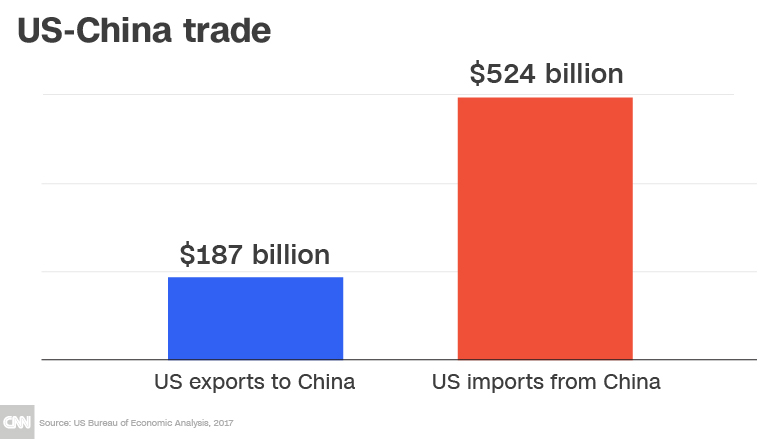 The U.S. imports a LOT more Chinese goods than the Chinese import in regards to American goods and its easy to see above.

What is not shown in the numbers is that many American exports are not easily replaced due to proprietary technology and IP, however, the gap is still so large that it will play right into China's hands.

Beijing wasted no time in responding today and stated that they would respond in equal scale and speed. The Chinese haven't issued a list but have stated it would be an identical 25% on $50 billion of American exports.