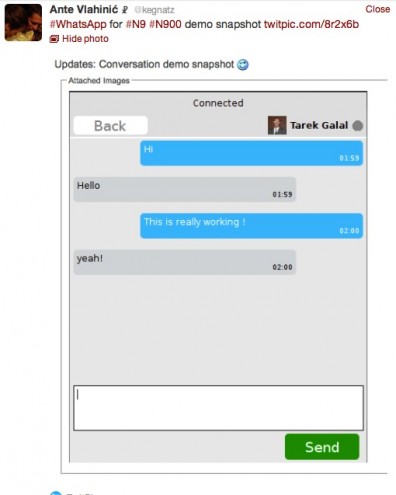 Nokia's N9 is a great phone, as you read in our review. However with Nokia abandoning Meego for Windows Phone, there is little reason for big-time developers to invest their time and money on a platform that won't bring in the big bucks. One of those developers is the creator of Whatsapp. There's an online petition running demanding Whatsapp to be officially developed for N9 but the company has categorically stated it will not be happening anytime soon. However while Meego might not have a great future with big time developers, what it does have is an excellent developer community; which as I type is working hard in porting Whatsapp to Meego.

The app is still a work in progress and is not ready for prime time use. The screenshot above clearly shows the developers have successfully been able to send and receive messages. The app is based on the Series 40 J2ME app. A fully working port is expected to be released soon. I'm not sure what Whatsapp will have to say about all this when the app is ready for download. For now enjoy the great work developers are doing!