YouTuber frost Danger has released a video showcasing a comparison between PlayStation 4 exclusive Uncharted 4: A Thief's End and Xbox timed exclusive Rise of the Tomb Raider. 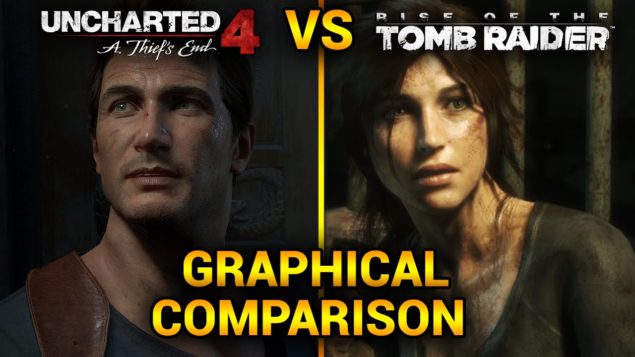 You can view the video comparison below:

During the second interview of the newly started series from Sony, Conversation with Creators with Will Wheaton, Naughty Dog's Anthony Newman, who is the co-lead designer of Uncharted 4, stressed once again that they are using real-time cutscenes for Uncharted 4.

As promised Naughty Dog have broadcasted the whole E3 2015 demo on their twitch channel, showcasing an awesome chase sequence as Drake and Sully race to help Drake’s brother, Sam evade Shoreline mercenaries. Naughty Dog has also released a quite interesting video detailing what the job of a Visual Effect Artist at the highly acclaimed studio entails. Aiming to attract new talent, VFX artists Eben Cook and Iki Ikram, give us a small glimpse of a work-in-progress explosion in Uncharted 4 (at the 2.54 mark) and of some shooting (at the 0:40 mark).

This time around she is more prepared and better equipped, to face bigger challenges and explore larger tombs with much more puzzle solving and platforming action. The environment of Siberia will offer more extreme conditions for Lara to adapt to, and her new equipment will be put to great use when facing avalanches and climbing dangerous icy peaks.