It's been a little more than a month since developer Naughty Dog broke the news about an Uncharted 3: Drake's Deception beta, but even then, all the team gave us was a set of dates. Today, Naughty Dog is giving us the whole, wonderful enchilada.

Below, you find every critical, nerdy detail and video flythrough you need to get ready for the Uncharted 3 multiplayer beta that's going live next month. I suggest you read it, study it, and go refresh yourself with the multiplayer of Uncharted 2: Among Thieves so that you don't look like a fool out there.

When does the Uncharted 3 multiplayer beta start?
If you have the voucher from Infamous 2 or a PlayStation Plus subscription, June 28th. If you're what I like to call a "normie," July 4th.

When does the Uncharted 3 multiplayer beta end?
July 13th.

What modes are included in the Uncharted 3 multiplayer beta?
There are nine modes. Team Deathmatch (duh), 3-Team Deathmatch (three teams of two face off), Team Objective (complete the assigned goals), Free For All (kill everyone), Plunder (capture the treasure), High Stakes (gamble with your XP and cash), and three co-op modes I can't tell you about yet but swear I will blow them out this week.

What boosters are available in the Uncharted 3 multiplayer beta?
Boosters -- equipable abilities that affect gameplay -- are back in Uncharted 3: Drake's Deception, but they've been revamped. When you choose one of these abilities and use it, you earn experience points for it. So, you're leveling up your profile and your abilities individually when you play the game. The Uncharted 3 multiplayer beta is going to feature eight boosters spread over two slots.

Booster Slot 1 Options
Come Here - See the opponent that killed you on your radar until he or she dies.

Retaliation - Spawn with the Power Weapon you were killed by.

Cloaked - Opponents won't see you on the radar and you can't be heard.

Weapon Expert - Gives you the ability to add additional mods to you weapons.

Booster Slot 2 Options
Back in the Saddle - Reduces your respawn time.

Bargain - Decreases the cost of Medal Kickbacks. (Special powers you set before the game and have to earn in a match.)

Daredevil - When you taunt over a defeated opponent, you get extra ammo.

What Medal Kickbacks are in the Uncharted 3 multiplayer beta?
Before you start a match, you decide which Medal Kickback you want to use. When you're out there on the battlefield and start earning medals, you start building toward your kickback. Get the amount of medals needed to use the kickback, and you can pull off the uber-maneuver.
Smoke Bomb - You vanish in a puff of smoke.

Speedy G - You get a speed boost.

What guns are in the Uncharted 3 multiplayer beta?
AK-47, G-Mal and the Dragon Sniper round out the long guns. Pistols are also included, and the above Medal Kickback confirms RPGs. 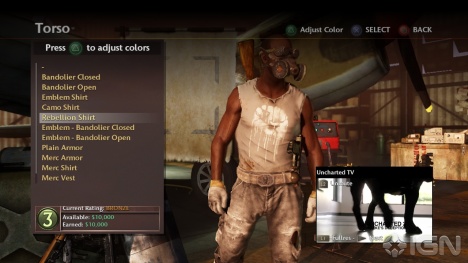 You edit that pirate!
What Mods are in the Uncharted 3 multiplayer beta?
For your long guns, there are two -- clip size and Call Out (which shows the location of enemies). For the pistols, you can increase the total amount of ammo and the rate of fire for the Arm Micro.

What characters are in the Uncharted 3 multiplayer beta?
If you choose to be a hero, you can be Nathan Drake, Sully or a treasure hunter. If you're going to be a villain, you're a pirate. However, remember that you can customize the hell out of these characters. Shirts, hats, sunglasses, and more will help you make your avatar your own.

Uncharted 3 has been under the radar for many die hard PS3 owners, this game is the cream of the crop for the PS3 line of exclusives with Uncharted 1 and 2 being awesome games as examples of the glory of this series one can only wonder what Uncharted 3 will have for it's fans? While the BETA is available to those of you on PSN+ it will also be available for a limited time when you buy your copy of Infamous 2 for a limited time only!