UE4 Brings The Horror Of Inner Chains To Life 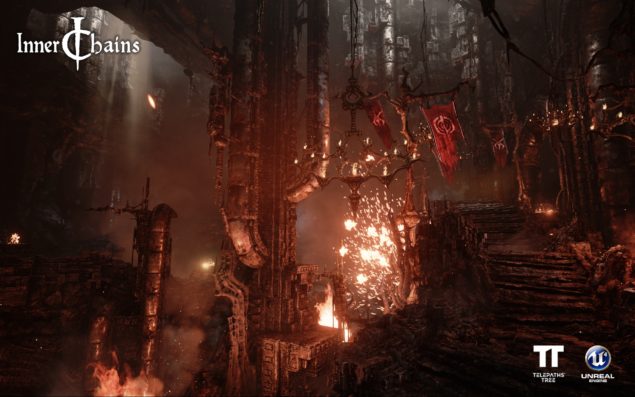 The game is a horror FPS coming to PC and powered by Unreal Engine 4. Here's how they described it in the press release:

Inner Chains is a game where players will get a chance to get to know the world and themselves. They’ll be fighting for their own life and survival to soon discover the secret revealing mechanisms, that guide the rulers of their part of this dark and mystical world.

By throwing gamers into this dark and mysterious universe, we wanted to make them feel a bit lost at the beginning. But in the same time to encourage them to discover its secrets, so soon enough they learn how to use the environment against their enemies – said Tomasz Strzałkowski, CEO. Our approach when designing the levels was to always give players more than just one way to achieve their goal. We didn’t want to lead them by the hand, as the freedom of how you handle the situation was one of our top priorities. So instead we’ve implemented a system of clues and hints, that will help gamers find the right solution. But how they’ll face this or other opponent or the hostile place, depends entirely on them – Strzałkowski added.

While wandering from forgotten, mountain ruins, through a dangerous forest where flora and fauna become mortal enemies, to the great temples built by a mysterious caste, whose existence and objectives hide many secrets – players will reveal Inner Chains story carved in those places and use it to fight their enemies.

Earth itself is way different in Inner Chains from the one we know.

Distant future. Several million years have passed and the planet is no longer what it used to be. Natureby evolution, striving for excellence and adapting to the prevailing conditions began to resemble technology, thus creating biomechanical shapes and mechanisms. Technology itself possessing artificial intelligence after the fall of humanity also tried to adapt to the same conditions. As a result a very strong symbiosis between technology and nature had been established and since then, they have evolved together. In this world, it is not entirely clear what is organic and what is not.

After millions of years of change the human being reappears, but its civilization development stopped at the equivalent of our medieval times. People have the technology, but without much awareness of what it is and how it works. For them this is a natural environment, so they take the advantage of what the world gives them. Some social mechanisms though that have always accompanied man, such as faith, oppression and manipulation, are still present.

We'll keep an eye on this one for sure. Don't forget to check out the first stunning in-game screenshots and teaser trailer below.