The long running saga between Ubisoft (EPA:UBI) and Vivendi (EPA:VIV) took another turn as the latter once again abstained from voting on any resolutions at the shareholder meeting, despite earlier pleas from management to support some of the key initiatives.

The particular issue of contention this time around seems to have been the compensation plan for staff including the firm giving free shares to its employees, a model which many firms use to incentivise workers. Somewhat unsurprisingly however, Vivendi abstained and the measure failed.

Ubisoft will of course use this as yet another example of how the firm doesn’t think strategically and understand the gaming industry, while Vivendi will of course sit in the opposing camp and say that it shouldn’t further dilute its holding in the firm, particularly when some of those employees that would gain shares are senior managers who are opposed to its involvement in the company.

Vivendi later made a statement indicating that it withheld its vote on all resolutions as it has still not been given board level representation, despite its significant holding in the company.

The Pincer is Poised…

The AGM was preceded by a year of significant shareholder gains. As promised last year by CEO Yves Guillemot, the firm has made significant strides in improving its financial performance and the stock has jumped by over 70% in the last 12 months.

That much being said though, people need to keep in mind the dual pronged approach I have mentioned previously. Vivendi is in a strong position because realistically, whatever occurs, it will benefit. If the firm continues to outperform the market, stock price appreciation will see them make money on their significant stake in Ubisoft. Should the company flounder and have a bad run however, shareholder sentiment would likely shift towards a takeover which (despite all statements to the contrary), one has to expect is Vivendi’s ultimate goal.

The question which arises at that point is whether Vivendi has the stomach for what will have to be an aggressive takeover without the backing of the senior management team/founders.

For now, Vivendi continues its approach of making dissatisfied noises about not having board representation in a company where it is the largest shareholder with over 26%. The holding will later this year result in super-voting rights of close to 30%, beyond which it would be obliged to make a bid for the company under French law. 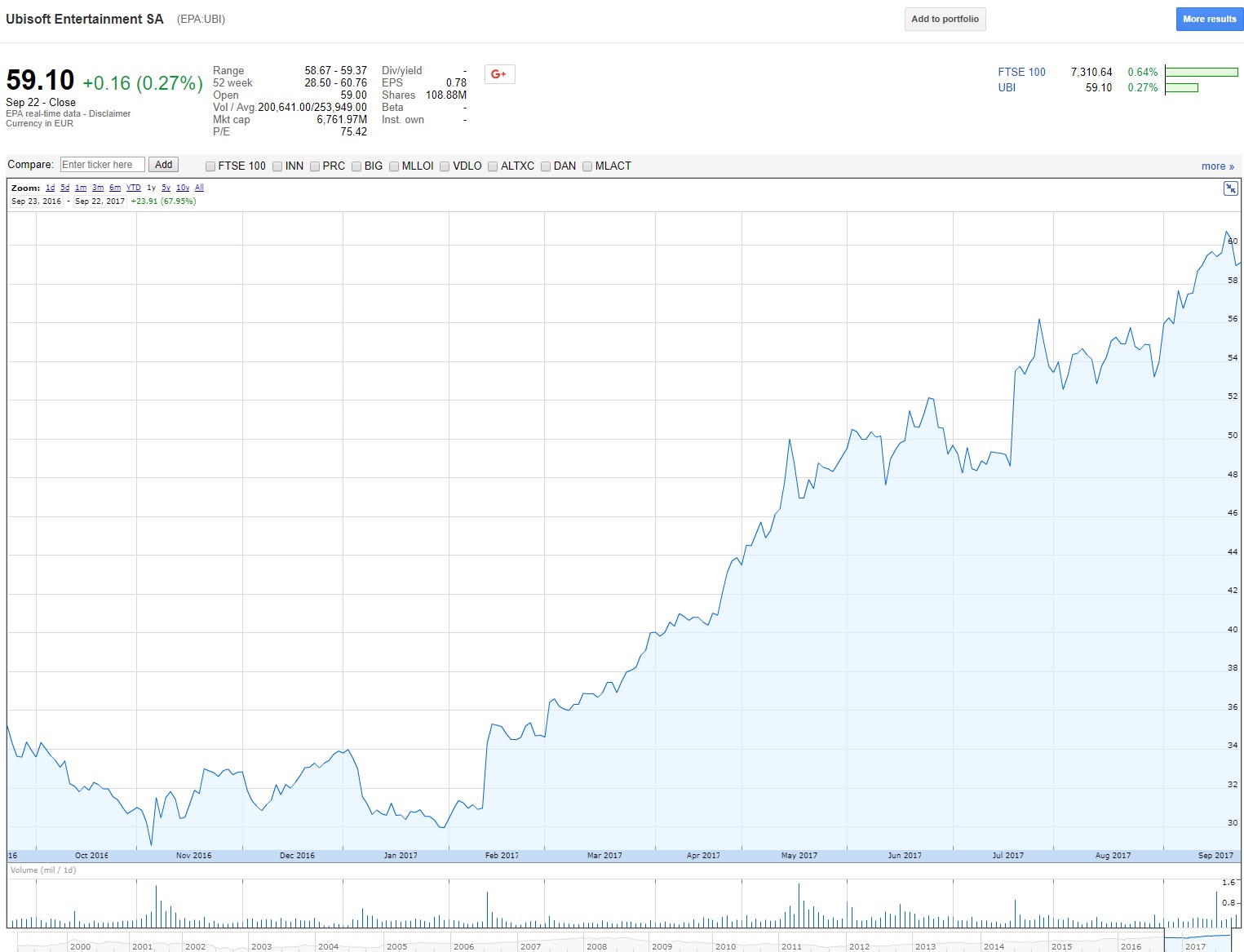 Ubisoft: Where do we go From Here?

Guillemot has made his position clear. He wants a free hand to run the company as he sees fit without even the slightest impact from Vivendi. For the time being, the options open to Vivendi are limited. With the firm in great shape from a financial performance and stock price perspective, support for a takeover from other shareholders is likely to remain limited. If management continues to do a good job, they can either benefit from the capital appreciation of their significant holding while sniping at their lack of influence, sell up and move on to other strategic plans or pursue a hostile takeover. Option 1 is probably the likeliest scenario in the short term.

Ultimately though (and as we’ve reported before), Ubisoft is nothing if not inconsistent. Earnings quality for years gone by has been highly mixed. The firm is on an upward trajectory for now and has stood by its impressive projections for future growth (18%) on the basis of a mix of new initiatives (cloud gaming, a regional push in Asia and mobile), as well as further monetisation of its existing user base, but if it slips up, no doubt the sentiment in the market will change and support for further Vivendi involvement may be more forthcoming.

At some point, something will give, but for now the Guillemot family lives to fight another day. We’ll be following the continuing saga as usual.